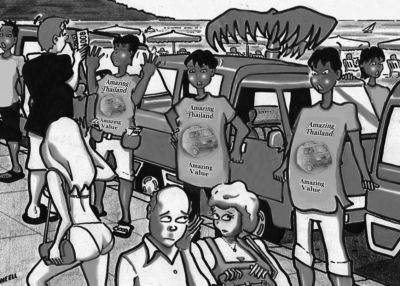 PHUKET: There is widespread support in Phuket for Governor Wichai Phraisa-ngop’s idea to fit all taxis and tuk-tuks on the island with meters.

It is not possible to quantify the economic damage the tourism industry in Phuket has suffered from the notorious patchwork of transport syndicates that continue to operate in defiance of the law, colluding to keep passenger fares the highest in the country.

In the case of the infamous tuk-tuks serving our West Coast beach communities, the focal points of Phuket tourism, we offer some of the most expensive taxi rides in the world, well above such places as New York, London, Zurich, Hawaii, Nice, Sydney, etc.

This situation has unnecessarily held back a tourism industry that in most other aspects operates under free-market conditions.

While problems with the ‘services’ provided by tuk-tuks in the major tourist centers of Patong, Kata and Karon are well documented, another important factor driving up transport costs and creating friction among rival groups is the way taxi concessions are allotted at Phuket International Airport (PIA).

At a recent meeting there, Gov Wichai and Senator Thanyarat Achariyachai criticized the management of Airports of Thailand (AoT), which runs PIA, for the way it has dealt with taxi, limousine and minivan concessions. The pair said the company’s profit margins seemed to be their only concern, not the Phuket tourism industry or the hundreds of thousands of people who rely on it to make a living.

Under the urging of the provincial government, the AoT gradually broke the monopoly held for years by the Phuket Airport Limousine and Business Cooperative. This was achieved by allowing metered taxis, an airport bus, and finally rival taxi operator Phuket Mai Khao Sakoo to operate on airport grounds.

But the increased competition hasn’t translated into lower costs for most passengers because the AoT continues to charge excessive fees to all who operate out of the airport, or at least those who do so legally. That an estimated 200 ‘black plate’ taxis are also shuttling passengers to and from the airport gives some indication of just how excessive the fees are.

As mentioned in this space a few weeks ago, the Tourism Authority of Thailand is currently promoting the country as a value-for-money tourist destination under the increasingly dubious catchphrase ‘Amazing Thailand, Amazing Value’.

Unfortunately, problems in Phuket’s public transport sector drive up prices across the board, making the province less competitive than it should be and driving tourists, both foreign and domestic, to rival destinations, most notably Cambodia, Laos, Vietnam, Malaysia and Bali.

Governor Wichai has reportedly asked the Ministry of Interior (MoI) to allow him to work past the mandatory retirement age of 60, which he will reach next month. We hope the MoI will seriously consider the request, as Mr Wichai may be the island’s only hope for giving tourists the kind of safe, reasonably priced transport options they have every right to expect.