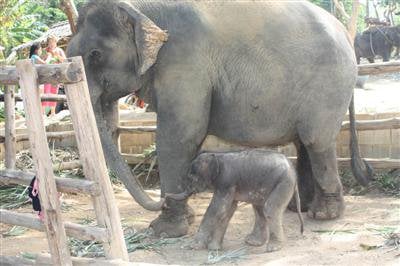 RAWAI, PHUKET: Tourists have been flocking to the Saiyuan Elephant Camp in Rawai to see a baby elephant, or ‘chang noi‘, born there over the weekend.

Prapoj Hoysung, mahout of the 32-year-old mother Phang Phimpha, said the baby was born at 3:16am on Saturday, just as Phuket was preparing for the dual celebrations of Chinese New Year and Valentine’s Day the following day.

Both the male baby and his mother, who had to endure 24 months of gestation, are in good health.

Phang Phimpa was allowed to stop her work carrying tourists through the forest more than three months ago to prepare for the birth, he said.

Mr Prapoj said the time of birth and other details would be taken to a monk to ensure the elephant is given a suitably auspicious name.

However, Thai tourists have already coined the name ‘Ang Pao Valentine’ for the baby beast.

Ang Pao is the name of the red envelope used to contain cash gifts given on Chinese New Year.