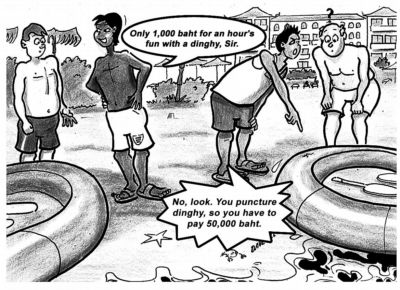 PHUKET: Wouldn’t it be better if Phuket’s government were turned over to computers? Surely an application exists whereby, having keyed in the facts, viable results emerge.

As it is, local government tends to tip-toe around decision-making until matters are manifestly out-of-hand.

Let’s take as a case in point the current eruption involving jet-skis precipitated by a YouTube video-clip showing a group of Royal Marines held at gun-point and forced to cough-up 44,000 baht “for repairs”. The fiasco has disgraced Phuket, spawned an international incident, and caused much hand-wringing among local and central government officials.

As it happens, there’s more than one such clip, and the contretemps comes after complaints from many governments around the world about similar behavior victimizing their nationals on holiday here. Numerous individual tourists have also written in the most strident of terms about the predatory methods of Phuket’s lovable jet-ski vendors.

Couldn’t it all have been predicted?

The jet-ski issue stretches back 20 years and is not peculiar to Phuket; similar stories abound wherever jet-skis operators rule the beaches in Thailand. The government’s reaction here at first was to ban them: as Thai law has no provisions for such vessels, that should have been easy. But police objected on the grounds that it would be damaging to the rice bowls of local people otherwise unable to participate in the then booming tourist-driven local economy.

So officials tackled the issue initially through procrastination; then, following several tourist injuries and deaths, through regulation. The formerly amorphous jet-ski vendors were compelled to form an association, so government could deal with a body instead of individuals. Then, their vessels had to be registered, and operational zones were delimited.

After a few more spectacular accidents, jet-ski boys were ordered to act as chauffeurs – leading to charges of rape-at-sea from Japanese women. In response, jet-skis were “banned” – Thai style, meaning that the ban would not come into effect for seven years. Meanwhile, the number of jet-skis was limited to 267 and no replacements were allowed.

But, the ban was extended, of course, and finally lapsed, and replacements were allowed after the 2004 tsunami.

Isn’t it time to face the facts?

Regulation has failed completely because the business model is flawed: a jet-ski vendor’s office is the beach; his company is a crew of freebooters; their bonuses are bottles of Saeng-Som. No reputable company, hotel, resort or tour agency has ever taken on jet-ski rentals. What can be done?

Banish them to an off-shore island and turn over the rental concessions to a single company? Perhaps. But better yet, why not turn the decision over to a computer? The ever-present ‘dark influences’ would be stripped out of the equation and objectivity would be assured.

Our track record as humans dealing with the jet-ski issue over the past two decades has not been good enough. What’s needed now is genuine and demonstrable change.

OPINION: Is Phuket ready for welfarism?