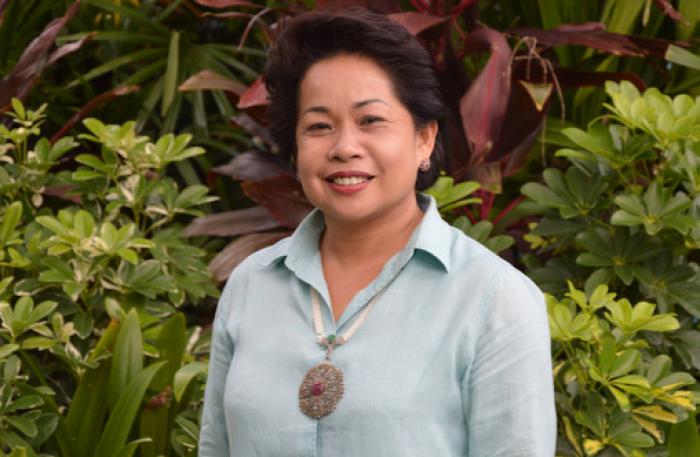 Chalermluck Kebsup, 50, was voted in as Patong Mayor in the polls on April 26 (story here). She has a master’s degree in political science from Sukhothai Thammathirat Open University and was Phuket Member of Parliament for 10 years, from 2001 to 2010. She is also a Patong native and a prominent businesswoman.

Ms Chalermluck has also received the state decoration Knight Grand Cordon (Special Class) of the Most Exalted Order of the White Elephant.

Here, she talks about the problems Patong faces and how she intends to solve them.

PHUKET: Patong is my hometown and I know what the problems are here and who made them. My goal as mayor is to fix these problems and make Patong a good place to live and visit. A number of members of the town council are from former mayor Pian’s Rak Patong party, but I don’t anticipate having trouble working with them if their goal is the same as mine – to make Patong better.

The most critical problem is corruption and the illegal businesses that it allows, such as illegal taxis and tuk-tuks, undocumented immigrants and the use of public space for private enterprise. One solution to this particular problem is to establish fair pricing for taxis and tuk-tuks.

The second serious problem facing the town is yearly flooding. When I was a girl, floods weren’t a problem – there were rice fields everywhere and rainwater drained through them. But now buildings and concrete have replaced the fields and water must flow through drains that are too narrow and blocked with garbage. I will increase the size of the drains and have them cleaned out.

Traffic is the next issue, and I have ideas for both Patong Hill and the beachfront road. For the hill, I want to see a system put in place to quickly clear accidents, because until that road is made safer there will continue to be accidents that paralyze traffic. The system would include a holding area that damaged or broken down vehicles can be moved to and repaired.

As for the beach road, I want to clear it of most of the vehicles that are there now. I want the motorbikes off the sidewalks, I want the tuk-tuks that are parked on the beach side of the road out of there, and I want the shopkeepers on that road who park in front of their shops to stop doing so. I want regulations put in place to limit parking time. Doing these things will improve traffic flow and give us back a view of the beach.

I also want Patong to look green again, so I plan to encourage every resident to have plants and trees in front of their homes.

To improve the environmental health, and at the same time make the town more attractive, I want to build more wastewater-treatment facilities and raise awareness among local people and business owners that releasing untreated water pollutes our beach and sea.

Another pollution – noise pollution – I’ve heard a lot about from residents and tourists, who say it keeps them awake at night. One way to improve this is to have regulations limiting the time that fireworks can be set off.

The last issue, for now, is the use of public spaces. Think about Loma Park; the huge number of stalls there make it ugly, and they block the view of the very thing tourists come for – the beach. Visitors also come for Thai culture, and I want to ban events on the beach that are not connected to Thai culture.

As a Patong native and as an MP, I’ve talked to a lot of people about the problems the town faces. As soon as my term as MP finished, I knew I wanted to be the mayor of Patong. It’s time to solve the problems that have been going on for too long.

Save the living dead: put down the smartphones