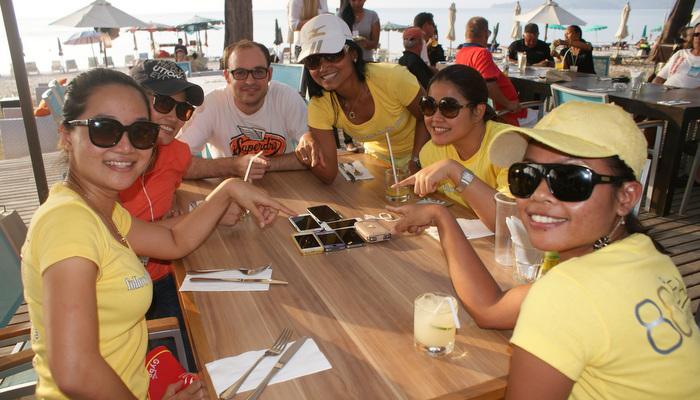 PHUKET: Having recently become addicted to the American TV show The Walking Dead, where the survivors of a zombie-virus plague battle for survival in the post-apocalyptic landscape of America, I couldn’t help but think about a more insidious zombie plague that is slowly taking over the world.

The zombies are all around us, everywhere… they could be your best friend, your brother or sister, your workmates or maybe even you. Yes, I’m talking about the smartphone zombies roaming our streets, the glassy, lifeless eyes in their pale emotionless faces glued to the glowing screens, thumbs twitching in jerky, reflexive movements over which they seem to yield no conscious control.

I myself caught the virus when a well-meaning friend gave me his old smartphone, blithely unaware that it was a vector for the virulent bug. It has a slow incubation period, gradually taking over your mind without you even realizing it.

First it was just checking my emails on the go. Next, I was having 20 minute conversations on a texting app; before long I found Angry Birds and a host of other useless yet somehow utterly engrossing apps, and it was too late… the virus had me.

But humanity is fighting back. Just recently at a beach club I came across a group of young women sitting around a table. Something seemed out of place, but I couldn’t quite put my finger on it. Wait, none of them were on their smartphones; in fact, all of their phones were in a pile in the middle of the table.

Could it be? Were these women actually members of the underground zombie resistance? I had to find out. I crept up to them, sweat beading on my brow.

“Is it true?” I whispered, “is there hope for the human race?”

“What?” they replied, puzzled.

“The phones… how did you develop immunity?”

It turned out these valiant heroines had stumbled upon a fiendishly simple way to combat the plague: They agreed to ignore their phones.

“It can’t be done!” I hear you cry. It’s true, no one can resist the fatal lure alone, but they had formed a pact; the first one to pick up or look at their phone during the meal would have to pay the whole bill.

So, join the resistance! Turn off your phone during meals, in the cinema, when you’re playing with your kids or taking a stroll – together we can survive this hellish plague and begin to rebuild humanity.

Balancing good and bad in a digital age