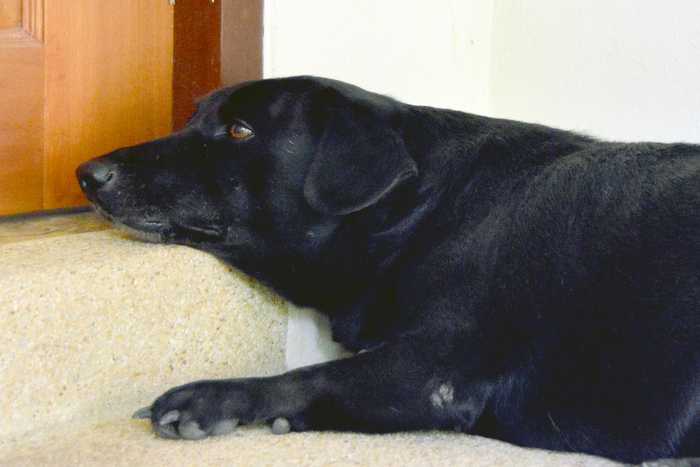 PHUKET: One morning, about six months ago, a bedraggled black dog appeared at the rear doorway to our office at Gazette Square. He looked worse for wear and had clearly been fending for himself on the street for some time.

He managed to beg a few scraps of food, and before long, he was waiting each morning for the first people to arrive at work in the hope of scoring an easy breakfast.

After a week or two, when it was clear he wasn’t just passing through, an animal-loving reporter decided to adopt him as the new office dog.

He was washed thoroughly and taken to the vet for a checkup and shots.

His change in appearance over the next few weeks and months was remarkable; bald patches on his coat grew back, he fattened up considerably and stopped withdrawing in fear from people attempting to pat him.

Now, with a regular diet of dry dog food and plenty of scraps from left-over breakfast and lunches, he appears to be living the life of Riley. Lounging in the shade all day, he sometimes curls up in front of the doorway to receive the cool flow of air conditioning seeping out from under the door.

The only time he seems to move faster than at a snail’s pace is when he spots the first arrivals to the office holding promising bags of food.

His sedentary lifestyle is the cause of much envy for the staff, particularly on busy days.

“Wouldn’t it be nice to be that dog?” we ask ourselves when we duck out the back for a coffee or a cigarette and see him spread out on the middle of the walkway, blissfully dozing in the mid-afternoon heat.

So, if you see a mournful-looking dog hanging around your workplace, don’t shoo it away. Take it in, feed it, wash it and watch its transformation.

Not only is it nice to save a dog from a miserable life on the street, but it will give you something to daydream about on those hectic days at work.

Show the Russians some Phuket love