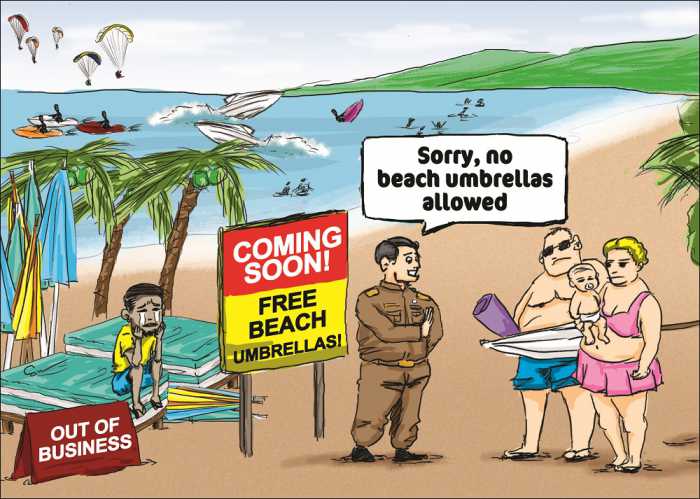 PHUKET: Despite some recent stormy weather, the “official” start to Phuket’s annual high season for tourism got underway as planned on November 1, kicked off by this year’s installment of the annual Phuket Carnival in Patong.

With a spectacular street procession, free concerts, fireworks and a wide range of other high-profile activities, this year’s event was branded under the theme “Blissful Beach” (story here) in recognition of the unprecedented efforts by the National Council for Peace and Order (NCPO) to rid the island’s beaches of illegal vendors.

But despite all the pomp and circumstance, Phuket’s most popular beaches have yet to attain “blissful” status so far this high season. The “clean sweep” of the beaches has led to the complete disappearance of its most wanted service – the beach loungers and umbrellas for rent – even as jet-skis and speedboat parasail operators continue their, at times, lethal tourism services unabated (story here).

Lest we forget, Phuket’s beaches remain the island’s premier attraction for many, if not most, foreign visitors. The Phuket Gazette has received numerous queries from visitors in recent months asking if they could expect loungers and umbrellas to be available for them – or if they should opt for another destination.

In contrast, nearly every comment the Gazette receives about jet-skis and speedboat parasail operators are complaints: most often about the notorious “damage scams”, but also about how annoying and dangerous they are.

The pre-coup situation on Phuket’s beaches was in long need of an overhaul, but failure to allow the return of the beach-lounger-and-umbrella combos in time for the high season comes across as a classic case of “throwing out the baby with the bath water” (story here).

For better or worse, Phuket evolved as a beach tourism destination with beach loungers and parasols as an integral part of the infrastructure. That corrupt local politicians used them to illegally amass personal fortunes over the years does not negate that reality.

Their absence not only compromises the island’s attractiveness to a huge segment of tourists, but also runs the risk of turning well-intentioned efforts “to return happiness” into an international debacle: with “blissful” replaced by “blisterful” to describe the sun-baked reality.

Tourists need loungers and parasols not only as convenience, but as the first line of defence against the sun’s rays. Sadly, untold thousands of units remain stacked uselessly away in beachside locations and many people remain unemployed as a result.

It is obviously too late to develop a comprehensive plan for a fair and transparent beach lounger rental industry for this high season, but by whatever means, we need to get them back on our beaches as soon as possible: like sandbags in the face of rising floodwaters. We can figure out a better long-term solution during the next low season.

Jet-skis in Phuket must go – for good