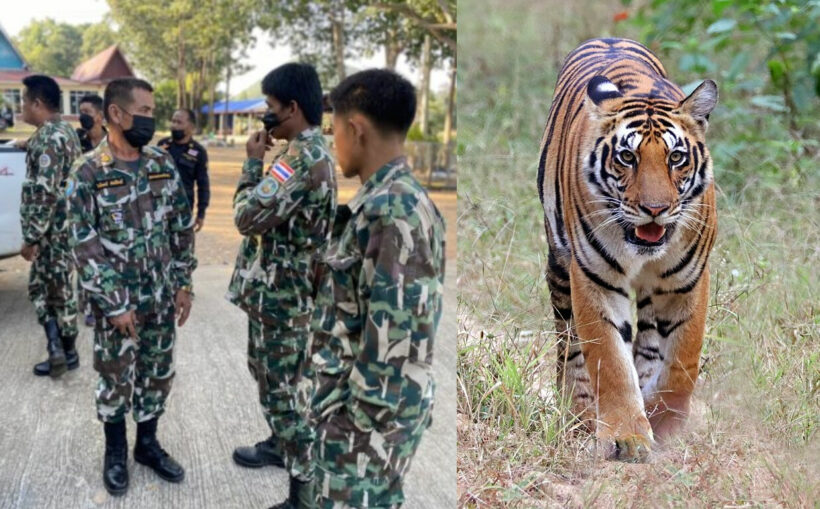 PHOTO: A stray tiger wanders Kamphaeng Phet for a 5th day. (via Wikimedia)

Of all the lost things someone could possibly be searching for, a tiger may be amongst the most unnerving. But today officials report that the search for Vichit, a 4 year old Bengal tiger continues for the fifth day. The cat wandered out of its habitat in the Huai Kha Khaeng Wildlife Sanctuary five days ago.

The chief of the 12th Conservation Area Administrative Office confirmed that rumours that the tiger had been hit and injured by a car were not true. The tiger is wearing a collar with an electronic tag in it which alerts wildlife officials of the cat’s movement, though apparently not closely enough to capture the wandering big animal.

The tracking signal indicated that the stray tiger is still wandering freely around Pang Silathong district of Kamphaeng Phet at Khao Nam Oon next to Mae Wong National Park. Officials said they can’t be sure of when they might be able to capture Vichit and return the big cat to its home environment.

Authorities have dispatched 4 park ranger teams from Mae Wong National Park to patrol the area, particularly the main and secondary roads where the tiger and humans are most likely to cross paths. They will patrol in Pang Silathong district between Ban Bang Manao and Khao Noi Pattanaram. A team of veterinarians are also on call in case the large cat is found.

While one would assume it goes without saying, authorities are warning villagers, locals, and anyone who spots Vichit to immediately report the sighting and not to attempt to approach or harm the tiger.

Jason
Here kitty, kitty....here kitty, kitty, kitty....
Tanuki
Having read the main title of this post...about a tiger 'on the loose' I think of the classic Billy Connelly line.. "Ya missing the point here a wee bit" It's a wild animal, it's supposed to be LOOSE is it…

Marble-eye
Bleeding Bengal tigers coming over here from India, taking the jobs off our tigers, wanting an easy life like being drugged up all day to make dozy tourists look brave when seen stroking one. Showing their snaps to all their…

Poolie
1 hour ago, Tanuki said: Hope the Chinese do not get wind of this story..they'll have it tracked & shot before any park ranger gets a look in! https://www.worldwildlife.org/pages/camera-captures-evidence-of-wild-amur-tigers-in-china No they wont.