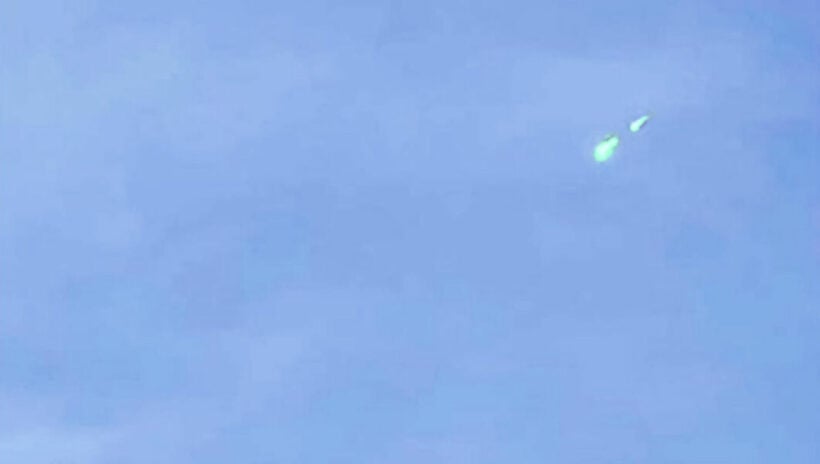 PHOTO: Green glows and an explosive sound were witnessed in Northern Thailand. (via Alisa Seya)

It’s a bird! It’s a plane! It’s a…. bolide?! Last night in Nothern Thailand, sounds like an explosion were heard while many witnessed a mysterious greenish turquoise glow in the skies above. Scientists suspect it may have been a bright type of meteor called a bolide.

The National Astronomical Research Institute of Thailand explained that the sights and sounds many observed and some photographed were likely this unusually bright type of meteor tearing through the Earth’s atmosphere. Bolide, from the Greek word for missile, is a term used to describe especially bright meteors that streak through the sky.

They are often as bright as the light given off by a full moon, though superbolides can be up to 100 times brighter. There is no exact definition so the term bolide is often a blanket term synonymous with a fireball in the sky.

The meteor was seen travelling from west to east in the skies last night above Northern provinces of Thailand. The explosion was reportedly heard in Chiang Mai, Lampang, Lamphun, Mae Hong Son, and Phayao provinces.

About 6,000 meteorites enter the Earth’s atmosphere each year, and the vast majority of them burn up in the atmosphere. The ones that do make through to the Earth’s surface usually crash into the ocean or very remote areas.

Thai authorities reported that no damages or injuries have been attributed to the meteor seen over Northern Thailand. Authorities at NARIT reassure people that there is no cause for alarm or worry about the meteor.

Usually, bolides and meteors that enter the Earth’s atmosphere catch fire between 80 to 120 kilometres from the surface, the mesosphere where there is enough air and gasses to create enough friction to catch fire. When the meteorites accelerate past the speed of sound, the loud explosion of a sonic boom is heard.