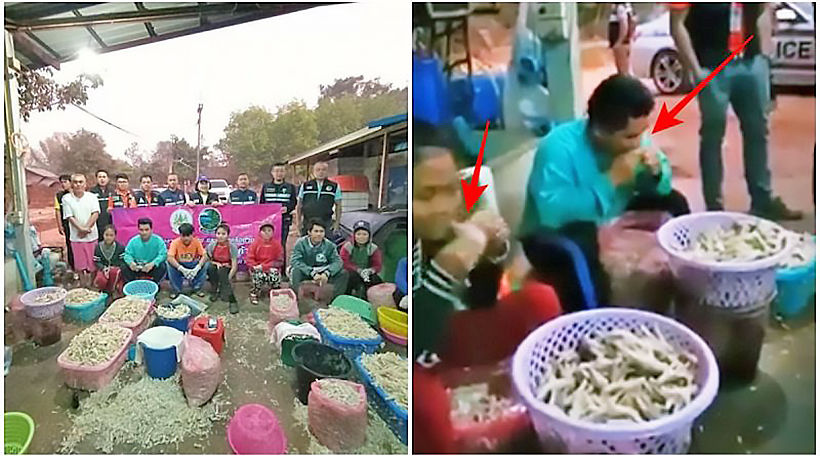 A factory in the northeastern Nong Khai province had some explaining to do after a video went viral showing employees using their mouths to extract the skin from chicken feet. The skin of chicken feet, (called leb mue nang in Thai), is a delicacy for many Thais that’s often used in spicy salad dishes.

Netizens were shocked to see employees picking up chicken feet and using their teeth to separate skin from bone before spitting it into a tub, all done extremely quickly.

The provincial governor, authorities from the Nong Khai Provincial Public Health Office and other officials went to inspect the factory in Nong Khai City on Wednesday. Officials tested the product for contamination and dangerous chemicals, and results were negative.

The 31 year old factory owner Nonglak told authorities says she’s been processing chicken foot skin for 5 years. The chicken feet are bought in bulk, and 400-500 kilograms of the skins are sold to customers every day.

Nong says at first the factory used pliers but it took about 5 minutes to skin one chicken foot and customers didn’t want the product because the skin was mangled and unattractive. She discovered that allowing employees to use their mouths to skin the feet worked 5 times faster and yielded a better product.

Since the video went viral, Nonglak has promised to retrain her employees to use the pliers again. Other factories have also been warned and will be changing to pliers as well. Nonglak has temporarily closed her factory until her staff have mastered the use of the pliers. She also revealed that employees get regular dental health care.