Tens of thousands of mostly residents of Nakhon Ratchasima attended a Buddhist merit making ceremony in Korat today to pay tribute to the late King Narai the Great, founder and heroine of the north eastern province, Thao Suranaree, during the early days of the Chakri Dynasty, and to remember the victims of the mass shooting last Saturday.

The gunman was eventually cornered and shot at 9am last Sunday morning.

10,000 monks attended the ceremony, from temples around Nakhon Ratchasima and neighbouring provinces Chaiyaphum, Buri Ram and Surin. They chanted prayers to bless the province and received alms from residents.

The alms presentation to the 10,000 monks was the second such ‘cleansing’ event of its kind, and was jointly organised by the local officials and the private sector to “instil a sense of unity and belonging among the residents of the province” following the horrific events on the Buddhist Makha Bucha day.

Meanwhile, this week the Terminal 21 mall also held a merit-making ceremony before reopening its doors on Thursday to provide moral support to shop operators, shoppers and local residents. Buddhist monks again chanted prayers to bring good luck for the city and the shopping mall. Over 200 monks received alms on the ground floor of the mall, in the Eiffel Square. The event was attended by government officials and a large number of locals who were still coming to terms with the violence.

Free food and drinks were offered to participants by the royally-sponsored makeshift kitchen and food shop operators. Students from Nakhonratchasima Technical College help staff some of the communal activities.

Many shops offered 50% discounts in a sign of good will and to try and attract customers back to the mall when it re-opened on the Thursday afternoon. The Nakhon Ratchasima governor Wichian Chantharanothai led officials and local residents to worship ay the Thao Suranaree monument to ward off bad spirits. 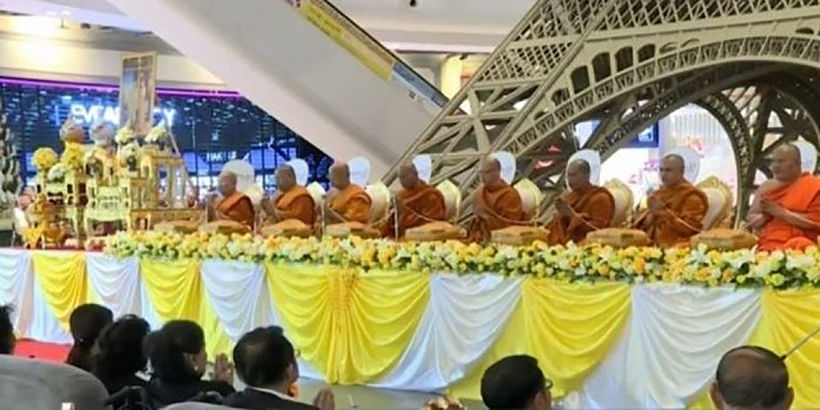