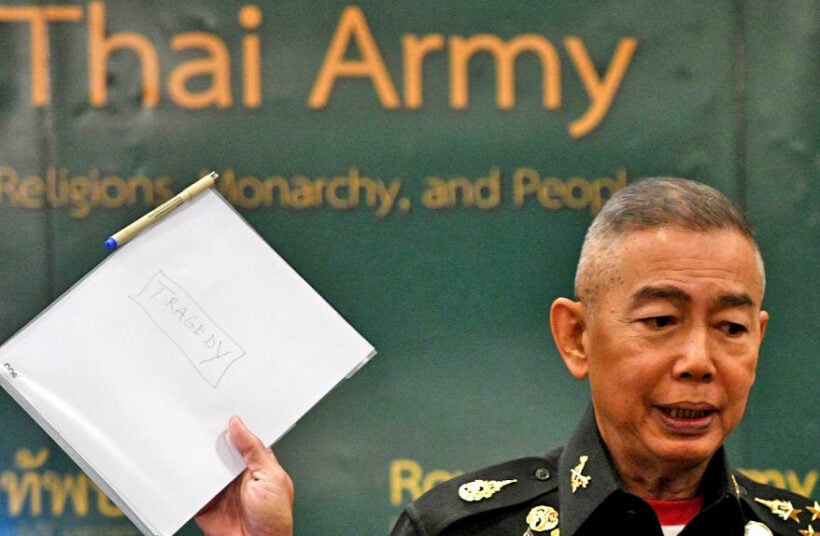 PHOTO: General Apirat clarifies some details and apologises to the families of victims - Thai PBS World

“The army chief offered his condolences to families of those killed and the injured and promised a career in the army if the victims’ children want to join the service.”

The 32 year old gunman who shot 30 people dead during his Saturday afternoon shooting spree in Korat over the weekend, Jakrapanth Thomma, owned legally registered guns. He had five guns – three pistols, one shotgun and a rifle, which were purchased under the Army’s “welfare gun” program. The welfare gun program in Thailand is widely practiced by police, security and armed forces agencies enabling staff to buy weapons at tax-free prices, as low as half the market price.

General Apirat Kongsompong, the Thai Army Commander-in-Chief said yesterday that the program should be scrapped as “there is no need for army officers to have their own guns”.

“Alternatively, the purchase of the guns by army officers must be more tightly controlled and permission to own a personal gun must be granted by an army general, not a colonel.”

According to the Thai army Commander-in-Chief during a media conference yesterday, the gunman used one of his three pistols to kill his commander and his commander’s mother-in-law during a meeting at her house resolve disagreements over an unpaid property brokerage fee.

But the system is flagrantly abused with most guns bought under the program resold to private individuals, at a profit, but the prices would still be lower than market prices. The program also distorts the gun import quotas, where gun dealers are allocated a very limited amount of guns to sell each year, especially handguns.

General Apirat apologised to families of the dead and the injured for the tragic incident committed by an army officer. He described the soldier as a becoming criminal the moment he pulled the trigger.

The army chief explained that, although army special units were sent to the Terminal 21 shopping centre, they were only providing backup to the police specialist ‘Hanuman’ unit who were responsible for entering the mall and searching for the gunman.