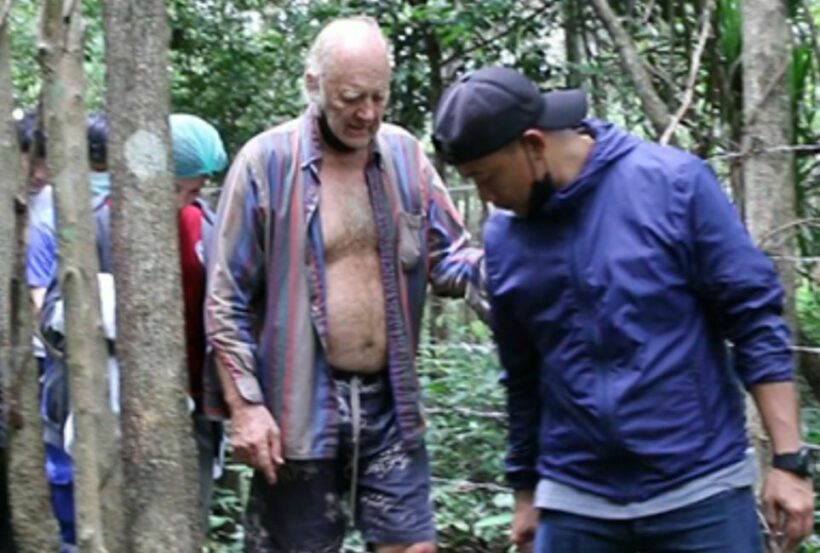 PHOTO: A man lost in a Khon Kaen forest for 3 days was rescued today. (via Bangkok Post)

Barry Weller enjoys nature and taking his motorbike to cruise through the local scenery in Khon Kaen. He would regularly go out for afternoon rides to explore the rice paddies and forest in the area, but would always return before dark. But on Tuesday afternoon the British man told his Thai wife that he was off for a ride through the local trees and rice field and he did not return that night.

His worried wife alerted authorities at the Ubon Rattana police station that night and a search party began efforts to track down the missing man. They searched through several local districts until they turned up his motorbike abandoned in a rice field near Ban Nong Saeng. Barry was nowhere to be found, however.

Today, 3 days later, Barry was rescued on a mountain in Khao Suan Kwang District when local residents stumbled upon him and contacted rescue workers and local authorities. When he was found, he was shoeless and his body was covered in scratches.

The Brit had parked his motorbike to take a stroll up in the neighbouring mountains but lost his way and was unable to find the path back to where he left his bike. According to rescue workers, Barry was able to survive for three days in the forest by picking and eating fruit and collecting and drinking rainwater.

After Barry was found, he was transported down the mountain and to Dong Yen monastery where his worried wife was relieved to be tearfully reunited with her husband. the couple thanked everybody for their assistance in finding Barry and returning him home safely.

Barry was taken to a local hospital for examination to check his condition after being stranded in the forest for 3 days. Doctors will make sure he is in stable condition and then release him to his home.

PapayaBokBok
18 hours ago, snapdragon said: Lost in the forest!? Must be the size of a footy pitch. Couldn't he read the stars like everyone else? Lost Grandpas wandering the forests, naked ladies in the streets!  Amazing Thailand Indeed!

AussieBob
19 hours ago, Fluke said: Why didnt he just walk down the mountain ? Just walk around until you find a path and then follow it , and it will lead to someones house Or same, but find a creek…

PapayaBokBok
1 minute ago, AussieBob said: Or same, but find a creek and follow it - they all go to one place and people always live near them. Learned this watching Dual Survival! :)

AussieBob
9 minutes ago, PapayaBokBok said: Learned this watching Dual Survival! :) Young fella.  We learned that as kids in school many decades ago. There was a school program done because a lot of aussie kids were getting lost in the bush. …

PapayaBokBok
22 hours ago, AussieBob said: Young fella.  We learned that as kids in school many decades ago. There was a school program done because a lot of aussie kids were getting lost in the bush.  Back then kids were told "here…