The so-called “new blood” political party to be led by “pro-democracy” billionaire Thanathorn Juangroongruangkit has promised to be an alternative to lead the conflict-plagued country out of the cycle of political division.

The 39 year old auto-parts tycoon admitted that he had been described as “another Thaksin Shinawatra”, but asked for time to prove himself.

“There’s no way to prove what I am unless I have the opportunity to get down to it,” he said in a recent interview with The101.world on Facebook Live.

“I want to prove that there are politicians who take the public agenda really seriously.”

Because he is a nephew of businessman-turned-politician Suriya Juangroongruangkit, a key figure in the Thaksin-led Thai Rak Thai Party and former transport minister, critics have expressed doubt whether Thanathorn is really just a successor to his uncle. Also, some people view him as having a close connection with the Shinawatra family, which has retained substantial influence in the previously ruling Pheu Thai Party. Thanathorn, however, dismissed such perceptions, saying that he only saw his uncle once or twice a year, adding that Suriya had been ill and was not politically active.

“People ask how I’m going to clear this impression. I can only say that if you are narrow-minded, you may look at my family name. But if you are open-minded, then look at my actions,” he said.

“I don’t have to clear this impression. This is the best I can do.”

The young heir to the giant auto-parts manufacturer Thai Summit announced earlier this month that he would form an “alternative party” to contest the next election as the Election Commission began accepting prospective parties’ pre-registrations. The partial relaxation of the ban on political activities came after almost four years of restrictions imposed since the 2014 military coup. The group, which is jointly led by “progressive pro-democracy” law professor Piyabutr Saengkanikkul, is seen as a new alternative for progressive young people who have lived in the recent conflict-ridden political climate, which they had done very little to create.

Royalists and conservatives, however, perceive the group as “anti-establishment”. One reason is that Thanathorn is the financier of the political publishing house Same Sky Books, which publishes books critical of the monarchy, while Piyabutr is a member of the Nitirat group that advocates the abolishment of the draconian lese majeste law. Thanathorn said both he and Piyabutr shared the same strong political stance. His goal in politics was to create a future that everyone could share in and steer the country out of conflict and divisions, he said. Also, he said he believed a strong parliamentary system and the rule of law were the two most critical issues he wanted to advocate.

“Our firm political stance and wish is the crucial point to solving problems and fix the so-called patronage system,” he said.

“Our decision about the solution has nothing to do with power, economic power or the need to maintain relationships with anyone. It comes from our very stance and I believe it can tackle complex issues.”

Thanathorn said it would take time before his party could really accomplish anything as it still had to learn along with society.

“People, having gone through the deep conflict in the past decade, have learned something. And that forms a foundation for a strong democracy,” he said. Despite being painted with a “red shirt” image, the tycoon asked for support from various colour-coded political camps, including supporters of the defunct pro-coup movement People’s Democratic Reform Committee as well as the red-shirt United Front for Democracy against Dictatorship. Thanathorn sought support from the red-shirts to help grow and sustain the country’s democracy. 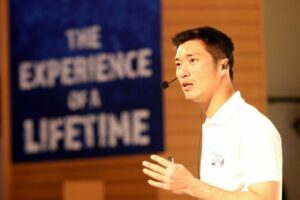 Tourists arrested over alleged illicit drug use in Ranong