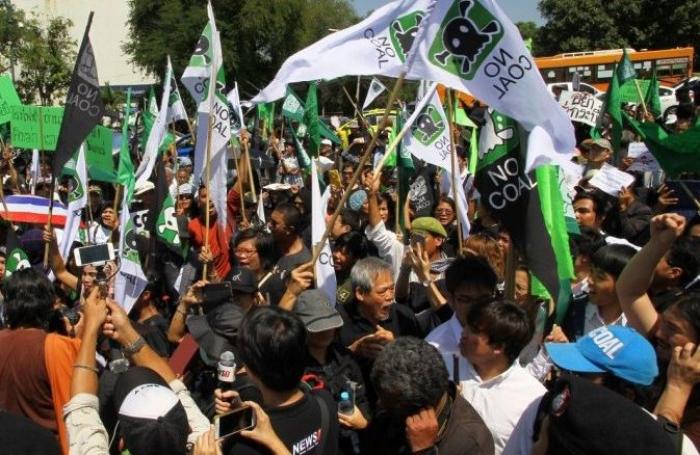 BANGKOK: Protestors have vowed to continue their campaign with mass demonstrations in Bangkok, after the controversial Krabi coal-fired power plant project finally got the go-ahead yesterday, following two years of resistance.

The committee ordered the Natural Resources and Environmental Policy and Planning Office to rush the project’s Environmental and Health Impact Assessment by considering the comments of the tripartite committee.

After the decision was announced, protesters gathered outside Government House, marched to the entrance and tried to enter the compound, but were blocked by a line of police officers. Minor clashes between protesters and police went on throughout the afternoon as the demonstrators demanded that they be allowed to continue their protest and asked others affected by the decision to join their conflict.

Some opponents said they did not fear the “absolute power of the junta” and were “prepared to die fighting” the government’s “disastrous” policy.

Gen Prayuth, who heads the EPPO committee, said he was worried about power instability in the future as the Krabi plant had already been delayed for two years and there was a risk of blackouts in the South from increasing power demands in the future.

“We have considered the information and argument on the current electricity generation technology and concluded that a coal-fired power plant is the best option because it can generate electricity at a reasonable price and also be safe,” he said.

“Therefore, I have ordered the Electricity Generating Authority of Thailand [EGAT] and the Energy Ministry to continue with the project, while trying to reduce the conflict with the locals as much as possible.”

Prasitchai Nu-nuan from the group ‘Save Andaman from Coal’, announced that the protestors would continue demonstrating in front of the Government House until the project is scrapped.

“I would like people from all the Southern provinces and those who are affected by the government policies, no matter their political affiliation, to march to Bangkok, because this is not a political matter; this is a matter of people’s lives,” Mr Prasitchai said.

“The PM’s permission to move forward with the project is clear proof that the government is on the side of the big capitalists, not on the people’s side, and they are the tyrants who take advantage from their |own [Thai] people for their benefit.”

Akkaradej Chakchinda, another rally leader, said they had no plan to stop protesting despite the National Council for Peace and Order’s demonstration ban and they would not move till the government cancels the project.

Meanwhile, Kanokwan Sae-eiaw, a local from Ban Leam Hin in Krabi near the site of coal transporting pier, also vowed to continue protesting until they achieve their goal, because the livelihood of the people in her community is at stake.

“The project will destroy the healthy environment that we depend on. This is a matter of our lives, so I have to fight until the end,” Ms Kanokwan said.

Lt-Col Supak Wongsawat of Dusit Police Station sent a petition to the Civil Court, asking for an order to end the protest. The court accepted the petition and will hear out witnesses from both sides at 9am on Monday.