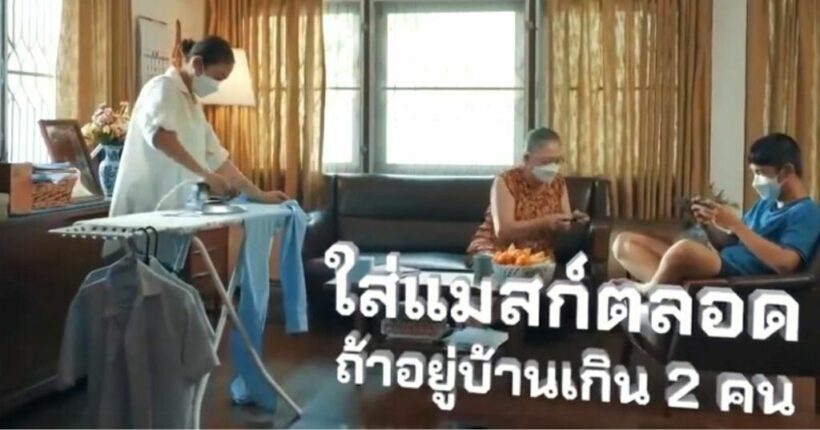 Screenshot shows Thai population are urged to wear masks at home if staying together with more than two members | Video via ปชส. จังหวัดภูเก็ต

Thailand’s Department of Health says a survey on face masks conducted during Songkran reveals that more than 90% of the population in Thailand wears face masks in public spaces. However, another 5-10% “refused” to wear face masks, saying they are “uncomfortable”.

Deputy Director-General of the Department of Health Ekkachai Piensiwatchara reported that 5-10% of the Thai population didn’t wear face masks in public (The Thaiger notes that this trend isn’t apparent around central Bangkok, where it is a rare sight indeed to see a Thai, or anyone for that matter, not wearing a mask in public).

The authority explained that some of the respondents who were ignoring wearing face masks in public said they “weren’t worried about the risk of being infected” and “felt uncomfortable” wearing them, especially during the hot season (and it has been a HOT hot season this year).

Other respondents noted that they and their family had already been infected before and had “nothing to worry about”.

Ekkachai said it was a misunderstanding because everyone remained at risk of being infected with different variants of Covid-19. He insisted that people should wear face masks when gathering in groups, whether they had already gotten infected with Covid or not. He also urged people to keep washing their hands and practice social distancing.

The government has launched the Thailand Prevention Project, which spreads Covid-19 information and suggestions to Thai people via videos. One video shared on Phuket Province’s official Facebook page suggests that people should keep their masks on even before reaching home. The footage also recommends that family members wear masks at home, if there are more than 2 members in the family.

oldschooler
8 hours ago, Noble_Design said: Not saying that wearing helmets are not important but do you know that motorcycle riders wear masks or some face coverings even before the pandemic? It's not just for the virus, motorcyclist are actually wearing…
oldschooler
6 hours ago, Fanta said: That Russian billionaire Oleg Tinov was right “10% of any country are morons.” Yes, lowest left hand section of the IQ bell curve. Fact.

riclag
At a beer bar in Udon right now , I’m the only one wearin a mask and there must be 40 people here. You might think this was pre covid ! Thai bar girls and falangs !
Skip
10 hours ago, Fanta said: That Russian billionaire Oleg Tinov was right “10% of any country are morons.” You assume that it's the 10% not wearing masks... haha... to a large extent masks have failed... vaccinations have failed
Marc26
You guys just love to worry and whine and moan Like a bunch of old ladies 555 I'm in Bangkok You can wear a mask or don't wear a mask It's not an issue I put…