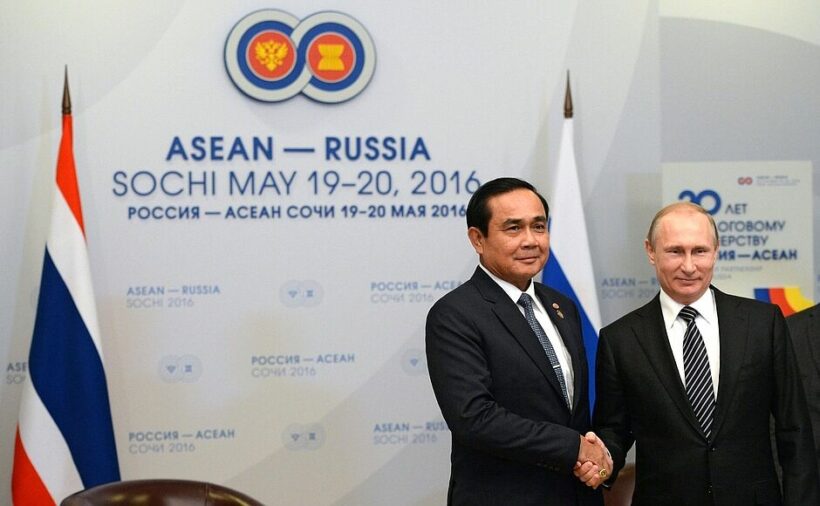 Prime Minister Prayut Chan-o-cha says Thailand will keep a neutral stance toward the Russia-Ukraine conflict. Speaking to MPs during their cabinet meeting yesterday, Prayut said they must consider Thailand’s the long-standing relations with Russia and tread carefully, an unnamed government official told the Bangkok Post.

“We need to be composed and make decisions carefully. Thailand must maintain a neutral stance and bring Thais in Ukraine back home quickly.”

After yesterday’s cabinet meeting, Prayut told reporters that Thailand will stick with Asean’s stance on the conflict. The grouping of Southeast Asian nations has called for “dialogue” among all parties involved to resolve the crisis in Ukraine. They have not rebuked Russia for its invasion of another sovereign nation.

“It is about the regional grouping’s decision. We need to keep a balance. But most importantly, we have been concerned about the safety of people in countries involved in the conflict. We also have to ensure Thais in those countries are safe.”

His comments came at the first round of Thai evacuees from Ukraine prepared to board flights home to Thailand. Today 96 evacuated Thais are expected to arrive from Bucharest and Warsaw. Dozens of other Thai citizens remain trapped in Ukrainian cities as the conflict enters it sixth day.

Cabinet ministers discussed the issue extensively during their meeting yesterday, after being pressured by 25 ambassadors in Thailand to rebuke Russia and side with Ukraine.

On Monday, 25 ambassadors met with the Foreign Ministry’s permanent secretary Thani Thongphakdi. They requested that the Thai government speak out against Russian’s invasion of Ukraine and urged Thailand to support the United Nations General Assembly’s resolution on the crisis, which is expected to be voted on this week at the UN’s headquarters in New York.

KRLMRX
2 hours ago, Stardust said: Intersting is in what I read in the german news about the cyper defends from there. There was one interesting part from the BND and MAD about the missinformation campaigns from Russia and that they…
Stardust
12 hours ago, KRLMRX said: maybe it's paranoia. although, most likely - excessive enthusiasm for official media and unwillingness to think critically. You are done! Sure North Korea, Syria, Belarus are with you and living together with you in this…
Bangkok_Gary
Another disgusting dictatorship. Boycott Thailand and spend your tourist dollars somewhere that has a free society.
Rick777
Prayut and Putin are two of the same.

Shishi
On 3/2/2022 at 6:59 AM, Thaiger said: Prime Minister Prayut Chan-o-cha says Thailand will keep a neutral stance toward the Russia-Ukraine conflict. Speaking to MPs during their cabinet meeting yesterday, Prayut said they must consider Thailand’s the long-standing relations with…