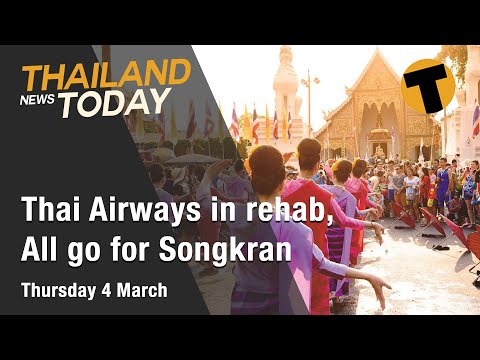 Thai Airways has submitted a rehabilitation plan in accordance with a Central Bankruptcy Court order after the the receiver’s appointment last September. The airline’s acting president says the rehabilitation plans aim to fully restructure and help the national flag carrier to regain profits.

The company has revealed its planned recovery to the media and says the savings and new profit centres will come from multiple aspects of the airline.

The Thai government is looking at offering free C‐19 vaccines to migrant workers who are covered under the nation’s social security program. The Thai Ministry of Labour is set to discuss the move with the Social Security Board. If approved, over 2.3 million migrant workers would be inoculated for free, estimated to cost around 3 billion baht. The Labour Minister says migrant manual labourers are vital to Thai industries and the economy, therefore, they should not be left out of the vaccination program.

Chiang Mai has ranked as the 3rd most polluted city in the world yesterday, according to AirVisual, following Lahor in Pakistan and New Delhi in India. The northern Thai city’s was recorded to have an average PM2.5 dust level higher than 200.
All 4 air quality monitoring stations in the municipal area reported the PM as exceeding the safe level, with the deputy chief of an air pollution command citing some 928 hotspots detected across the nation’s 17 northern provinces.

The Thai musician and anti-government activist, known as “Ammy”, has had his bail request declined. The singer was arrested at Ratchathani Hospital, in the central province of Ayutthaya on charges of lèse majesté, arson, and violation of the Computer Crimes Act. He is accused of being 1 of 3 people to set fire to a portrait of HM the King outside Bangkok’s Khlong Prem Central Prison on the night of February 28.

Thailand has hosted the first group of international tourists to carry out a “golf quarantine”. 42 golfers (41 from South Korea and 1 from Japan) flew into Thailand on February 19, entering quarantine at the Artitaya Golf Resort in the central province of Nakhon Nayok.

Guests following Thailand’s golf quarantine program are required to remain in their rooms for the first 3 days of their stay, after which they can roam freely around the resort and play golf. During their stay, guests are tested 3 times.

Thailand’s annual waste of water, the traditional Songkran festival, has been given the ‘all clear’ as long as the festivities are in line with C-19 prevention measures. PM Prayut Chan-o-cha says people will have to to abide by social distancing rules during the Songkran holiday from April 13 to 15. Looks like you’re going to need a bigger water pump pistol as short range shooters may infringe on the social distancing guidelines.