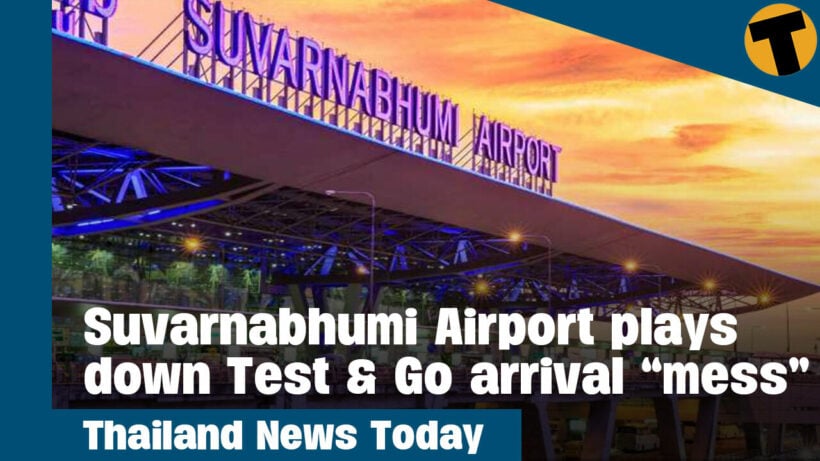 On Sunday, Thai YouTuber Atichan Cherngchavano complained about the airport management after finding crowds of travellers from the Test & Go program was left standing and confused in Suvarnabhumi airport. He said the situation was a mess, as the hotel staff had to shout out their guests’ names, while the travellers had to search for their hotel logos randomly “like playing a puzzle game”.

Yesterday, after his complaint went viral on Thai social media, the official Facebook page of Suvarnabhumi International Airport issued a press release to explain the situation. The caption on the post read…

”Regarding the issue of the crowded travellers and inconvenient service at the meeting point inside the airport terminal that was shared online, Suvarnabhumi Airport would like to clarify that the crowd happened at a peak time, and it happened only temporarily for a short period. The airport has already extended the service space, added more hotel counters, and arranged the hotel counters alphabetically according to their names.”

The General Manager of Suvarnabhumi Airport, Kittipong Kittikachorn, shared in the press release that more passengers travelled to Thailand from April 1 after the CCSA relaxed the restrictions to ease the pre-arrival PCR test.

He said the number of passengers had increased from 6,000 – 7,000 per day to 9,000 – 10,000 per day, which caused the peak hours of 5 am – 7 am and 12 pm – 3 pm. There were about 1,500 – 2,000 passengers arriving during the peak hours, and the maximum capacity of the airport to welcome the arriving passengers is currently just 3,000 people per hour due to Covid-19 prevention measures. Yes, passenger bottlenecks, at one of the largest airports in Southeast Asia, during Covid.

The manager added that the airport and the Emergency Operation Center had already improved the service for the best efficiency to support the increasing numbers of passengers. The hotel counters at a meeting point inside the airport terminal were increased from 8 to 17 counters, and the hotel names have now been arranged alphabetically. Wow! What an innovative idea. Besides, he says, the baggage reclaim was expanded into two tracks to make it quicker for travellers to grab their bags. Other than that, he said that more hotel and airport staff, as well as officers from the Thailand Tourism Authority, would be on standby.

Many Thai netizens commented on the airport’s response. Some thanked the authorities for taking comments from passengers into account and immediately fixing the problem, while others thanked the YouTuber who raised the alarm, which resulted in immediate improvement. However, others commented that the changes hadn’t made much of a difference, as the airport still appeared to be crowded, judging from the pictures.

Well, there’s only one way to find out if this is true or not. Next time you’re in Suvarnabhumi airport, be sure to share your experience.

Speaking of traffic, Airports of Thailand expects about a million air travellers to transit through its airports during Songkran this week.

The estimate includes both international and domestic passengers who will catch flights to, from and around Thailand. Since the government lifted several Covid restrictions on April 1, including scrapping the pre-arrival PCR test requirement, the number of travellers entering the country has noticeably increased.

During the first seven days of April, around 895,000 people flew through Phuket, Hat Yai, Chiang Rai, Chiang Mai and Bangkok’s two airports, Suvarnabhumi and Don Mueang. The six airports recorded more than 8,200 flights in the first week of the month, averaging around 1,180 flights per day. Of last week’s travellers, 202,280 were international, while nearly 692,500 were domestic, for impressive increases of 39% and 14%, respectively.

Flights are projected to further increase during the Thai New Year, with more than 9,300 flights expected this week — a 14% increase from this time last year. That figure includes some 2,500 international flights and 6,800 domestic flights, for a 123% increase and 2% decrease over last year, respectively.

To accommodate the increase in passengers, airlines are filling more seats while increasing flights. According to the AoT, Thailand saw an average of nearly 1,180 international flights per day in the first week of April, for a total of more than 8,200 flights, up 5% from March. Meanwhile, domestic flights also increased by 15%.

Starting after the Songkran festival, the quarantine period for high-risk travellers from abroad will be reduced from 7 days to “5+5” days. This means such travellers will be required to quarantine for five days, then self-observe their symptoms for another five days.

Speaking at a press conference on Monday, the director-general of the Department of Disease Control, Dr. Opas Kankawinpong, reported that the department had already agreed on the measure and expected to enact it after the Thai New Year.

Meanwhile, Thailand’s Public Health Minister, Anutin Charnvirakul, also urged the elderly group to get vaccinated. He added that vaccines could help prevent severe symptoms and death, while the number of new cases during Songkran has been estimated to possibly reach 100 thousand per day, in a “worse case scenario”.

The Minister’s remarks are in line with the government’s push to administer booster shots to the nation’s elderly population, and those at risk, to bolster their immunity to Covid-19 ahead of the Songkran festival, which will officially begin on Wednesday, April 13.

Public prosecutors in Thailand have indicted Progressive Movement leader Thanathorn Juangroongruangkit on a lèse majesté charge and for violating the Computer Crime Act on Monday.

The charges centre on remarks he made during a Livestream talk he gave last year, in which he discussed the government’s procurement of the AstraZeneca vaccine, and allegedly cast indirect suspicion on His Majesty the King.

After the indictment, Thanathorn was temporarily released on bail. Outside the court yesterday, he told reporters that he intends to contest the charges, which he thinks are politically motivated, saying…

“It is clear that I am one of the key opposition [leaders] and I think the objective is to silence me, to make the public afraid. So if we can keep silent, keep our mouths shut, they win.”

Police accused Thanathorn, who is the chairman of the Progressive Movement, of criticising the government for delaying its obtaining of Covid-19 vaccines, as well as for relying too heavily on the AstraZeneca vaccine, supplied by Siam Bioscience Company. Thanathorn made the remarks during a speech that was broadcast on Facebook Live on January 18 last year.

Siam Bioscience was founded in 2009. It is financed and owned by a subsidiary of the Crown Property Bureau. The company has struck a deal with Oxford University and AstraZeneca to produce the vaccine in Thailand using their technology, to administer the vaccine locally, as well as distributing it to other countries in Southeast Asia.

The indictment alleged that Thanathorn’s statements, which were published online, were intended to make the public look suspiciously at Thailand’s head of state. He has been granted a temporary release by the Criminal Court on a surety bail of 90,000 baht.

Thanathorn was the former leader of the Future Forward Party which polled the third-highest number of votes in the 2019 general election, relegating the formerly powerful Democrats into the fourth position.

People in Thailand will be allowed to grow “as many cannabis plants” as they like in their own homes from June 9. But hey, we’re talking about the Thai government here, so if you don’t read the fine print you can still get into trouble with the law. And as usual, the fine print is confusing.

Condition #1: The plants must be the medical-grade used for medicinal purposes only. Growing for recreational use is not allowed.

Right now, no clear details have been revealed about how one proves their green plant will be used for medical purposes, or about which authorities need to be informed and how. Even now, saying the word too much in this show can get this episode flagged. Hopefully, Health Minister and champion of vague cannabis laws Anutin Chanvirakul will extrapolate on these points before June 9.

At Anutin’s latest medical conference at Sisaket Rajabhat University, the health minister reminded everyone that the green plant was removed from the list of narcotics in February and the 120 waiting period after the delisting will be up on June 9.

riclag
This is why its so important to complain and whine ! Yah think the leadership at the airport would of corrected the situation if this didn’t go viral! Meh !
Giltee
I arrived yesterday and the test and go hotel counters at the airport are chaotic. Nothing has changed. My hotel counter wasn’t where it was meant to be. I was told where it had shifted to but wasn’t allowed to…

Soidog
2 hours ago, Giltee said: I arrived yesterday and the test and go hotel counters at the airport are chaotic. Nothing has changed. My hotel counter wasn’t where it was meant to be. I was told where it had shifted…
Lawyers_Guns_and_Money
57 minutes ago, Soidog said: Thanks for the recent update. Of course it won’t change. Analytical thinking and problem solving aren’t strengths here I’m afraid. Why else would easily solved problems be left to drag on for years and years…