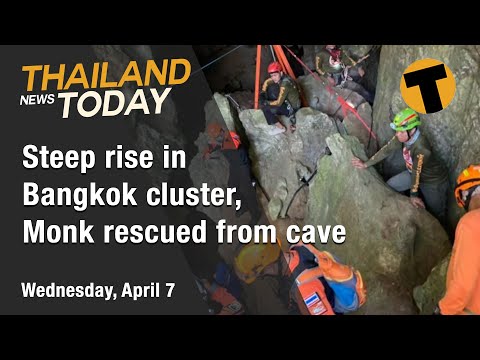 In today’s episode we look at…Thailand’s covid situation has suddenly swept back to the headlines with potential super spreader events now delivering rising infection numbers, especially in Bangkok and now in the provinces as well. And all this just days away from Songkran when Thais will have the busiest travel period in the past 12 months. Our full coverage coming up in a moment.

Another 334 new Covid-19 infections have been reported in Thailand today… 327 local infections and just 7 imported, a 30% increase on yesterday’s numbers. The figure shows a steep increase over the past week. There were 250 new cases announced on Tuesday.

And this morning the Phuket Health office today has announced 8 new cases on the island, but those cases won’t be added to the total until tomorrow. Yesterday an entertainment promoter called Kolour (with a K) sent out a message to all the attendees at a trio of weekend events, primarily at Cafe Del Mar in Kamala, as well as prep and post events in Bangla Road in Patong, at Illusion and Shelter.

Meanwhile, Chon Buri, just east of Bangkok, is reporting 10 new Covid infections this morning, with officials saying all the infections appear to have originated from other areas, including entertainment venues in Bangkok. 5 infections were found in Banglamung, which includes Pattaya, 1 in the city centre of Chon Buri, and 4 in Sri Racha.

As a result the Bangkok governor has already ordered the closure of Bangkok nightlife venues in 3 districts until at least April 19. The shutdown in Klong Toey, Watthana, and Bang Khae districts, which includes a lot of the popular haunts along Sukhumvit Road, comes as a result of new Covid-19 clusters. The Governor says thatm should infections spread to other districts, they too will face restrictions. For now, 196 nightlife venues across the 3 districts have been directly affected.

Rescue workers are attempting to free a Buddhist monk who has been stuck in a flooded cave in northern Thailand for at least 4 days. The 46 year old monk, Phra Ajarn Manat, is thought to have entered a cave in Phitsanulok province on April 3, and become trapped when the entrance flooded over the weekend. He was visiting Tham Phra Sai Ngam cave as part of a pilgrimage in the jungle.

(UPDATE: The monk was successfully rescued today. His health is OK)

And Thailand is hoping its newest anti-human trafficking report will earn an upgrade from the US from Tier 2 to Tier 1. The report was submitted to the Washington’s Trafficking in Persons Report.

Sony, Amazon Falls to set up amusement park in Thailand