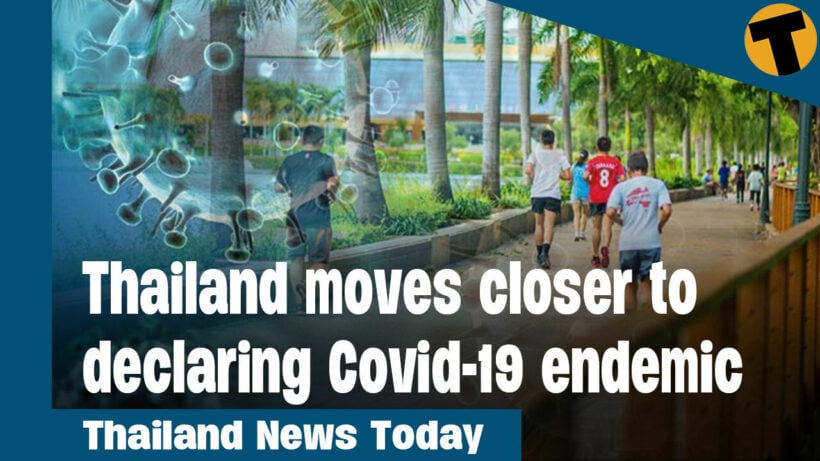 The requirement for overseas arrivals to take a PCR test 72 hours prior to departure from their home country could soon be scrapped. According to a report, the CCSA will discuss dropping the requirement when it meets tomorrow.

Dr. Kiattiphum Wongrajit from the Public Health Ministry says international arrivals would still be required to take a PCR test on arrival and a self-administered antigen test on day 5. Mandatory insurance coverage could also be reduced to 10,000 us dollars.

Officials have outlined 4 phases in the roadmap to declaring Covid endemic, but Kiattiphum says Thailand will also need confirmation from the World Health Organisation before bestowing endemic status on the virus. The 4-stage plan, which is also up for consideration at tomorrow’s CCSA meeting, looks like this:

Stage 1 between March 12 and early April: the “combat” phase where overseas arrivals take a PCR test on arrival and an antigen test on day 5. Unvaccinated travellers will be quarantined for 10 days. The country will remain in stage 1 as long as more than 3% of foreign arrivals test positive.

Stage 2, during April and May: the “plateau” phase, where fully vaccinated travellers will not need a pre-departure PCR test but will need to take a PCR test on arrival and an antigen test on day 5. Unvaccinated arrivals will need to quarantine for 5 days. Thailand will remain at stage 2 for as long as Covid is detected in between 1 and 3% of overseas arrivals.

Stage 3, between late May and June 30: the “declining” phase, where fully vaccinated arrivals can enter with no requirements. Unvaccinated travellers will need to take an antigen test on arrival. Test & Go will be ditched, but the Thailand Pass will remain. This phase will be for as long as infections are reported in fewer than 1% of foreign arrivals.

Stage 4, from July 1: the “post-pandemic” phase. This is when the government hopes the disease can be downgraded to endemic. International arrivals will be able to enter Thailand without restrictions, regardless of vaccination status.

In related news, the Public Health Ministry hopes to lift the mask mandate in Thailand’s public parks, as the government takes its first tentative steps to declare Covid endemic. However, Dr. Kiattibhoom adds that people infected with the virus would still be required to wear masks.
According to a Thai PBS World report, the government’s Covid-19 task force could also lift restrictions on numbers at football matches and concerts, but such events would still need to observe disease prevention measures.

The director of Thailand’s Office of the Alcohol Control Committee has been assigned to investigate anyone who shares photos of a famous Thai celebrity promoting a whisky brand.

The celebrity, Lisa from Blackpink, is a brand ambassador for the Scotch whisky company Chivas. In Thailand, it’s illegal to advertise alcohol and those who violate this law can be fined up to 500,000 baht or sentenced to one year in jail, or both.

In an exclusive interview this week, Lisa told High Snobiety she became a Chivas ambassador to inspire people to “elevate themselves”. The Chivas campaign ad shows Lisa talking about the hard work she’s put in to achieve success.

Lisa is Thai and was born in Thailand, however, she moved to South Korea in 2011 to train in K-pop. She joined Blackpink in 2016, the year the band debuted. She is the first non-Korean YG entertainment artist. Lisa has endorsed other brands in the past, including Celine, a French luxury brand.

The governor of Bangkok may soon step down as he prepares to run for a second term.

According to a source, Aswin Kwanmuang is likely to resign as early as next week as his team working on his re-election campaign. It’s understood Aswin and his advisers met earlier this week to complete the incumbent’s registration. Bangkok residents go to the polls on May 22.

Aswin is expected to run as an independent candidate but has said very little about his chances of being re-elected or even if he will run. If he does decide to seek a second term, he’s expected to resign around March 24 or 25. He is reported to have appointed a panel to check how his policies are being implemented.

Reports say that his campaign team has divided up canvassing into relevant constituencies, with Aswin supporters producing campaign posters. Several group members plan to run in the Bangkok city council elections, also taking place on May 22, and the group has been offering free vaccinations and dredging waterways in various districts across the capital.

Meanwhile, Pheu Thai MP for Bangkok, Jirayu, and several members of his party are calling for an investigation into Aswin’s tenure, accusing him of abuse of power for political gain.

A dangerous wild elephant that killed a woman and damaged farms is being tracked down in the central province of Prachin Buri. The 25-year-old elephant has caused so much damage and disruption that an order has been issued for park officials to immediately find and detain the elephant.

They’ve also been advised to take extreme care for their safety as the elephant is hot-tempered. The elephant roamed out of the Khao Ang Luaenai Wildlife Sanctuary in Kabinburi district, possibly in search of food, which is common for elephants in the area. He raided plantations, damaging orchards and crops, and killed a 73-year-old woman last month while she and a friend were picking vegetables and fruit.

Park officials are ordered to relocate the elephant to the wildlife sanctuary as soon as possible. It was advised that park authorities take extra caution given the elephant’s dangerous nature. The elephant was last seen on Monday night.

Several villagers have reported the damage to their farms, but one local says that villagers are rarely compensated for incidents involving wild elephants.

Aircraft wreckage washed up on a beach in the southern province Nakhon Si Thammarat and provincial officers have called in aircraft specialists to investigate. A local official says locals found similar wreckage six years ago.

A 3.2 metre long, 1.8 metre wide metal piece, weighing up to 80 kilograms, was found on Ta Praya beach. There were two spots that appeared to be burned. Barnacles and shells were also sticking to the surface, an indication that it had been in the sea for some time already. The aircraft part was marked with CCBU 07ZS, and many Thais took note of the number for a lottery ticket, of course, they would.

Two low-magnitude earthquakes shook two districts in Northern Thailand’s Chiang Rai Province. The earthquakes were very mild and residents in the areas were not affected, and probably didn’t even feel it, according to Thai media.

Last night in Japan, a powerful 7.3 magnitude earthquake hit the northeastern part of the country. According to a report on BBC, two people died and at least 90 people were injured. The report also shared that about 700,000 homes in Tokyo and 156,000 near the earthquake centre lost electric power after the hit.

Fundok
1 hour ago, ace035 said: Absolutely, by tricking, scamming & ripping off incoming tourists to a false positives on Day 1 T&G. I an not so sure about this. But certainly it's a safe source of steady income for those…
Txman33
It’s funny, the insurance requirement dropped from $50000 to $20000. I purchased the 50000 for $200 in November for 60 days. I recently purchased the $20000 and the price was the same. Only difference is $30000 less coverage.
regg4uu
US navy ships restricted. a battle group brings over 10000 sailors with millions and they restrict the Navy ships unless pay excessive fees.
Merwan2004
I would much rather board a plane in the USA with other passengers who did a PCR test in the USA. It would make me feel more comfortable and safe. The Thai government should cancel the PCR test on arrival.…
Bluey
Confusion reigns supreme. The third stage needs clarification They say fully vaccinated can enter without any requirements. They then say Test & Go will finish but you will still need a Thai Pass before entering the country. This appears to…