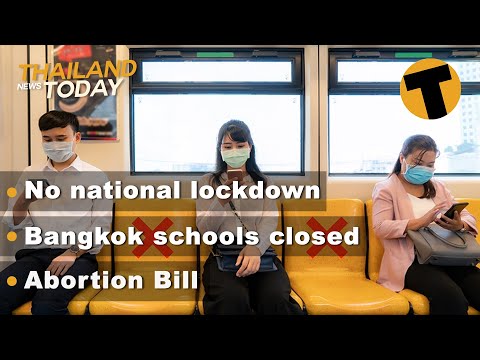 On behalf of the entire Thaiger team, Merry Christmas to all our readers and viewers. We really appreciate your support. May you have a few laughs and hugs tomorrow.

• Despite a record high in new Covid-19 cases, the Thai government has not imposed any national lockdowns. Provinces are now classified on a colour-scale depending on their current level of risk.

Provinces that have zero Covid-19 infections at the moment are classified as green.

• The Bangkok Metropolitan Administration has closed all 437 municipal schools and 292 nurseries in the capital as a precaution. Most city officials have also been ordered to work from home, calling on private companies and other government agencies to follow suit.

To date, 9,417 people have been tested for the virus as authorities track and trace those at risk of infection, with 5,292 results returned. Officials are testing at least 10,300 people.

Migrant workers are currently being quarantined in the fish market where they worked, in a bid to mitigate any further spread of the Samut Sakhon cluster.

• In a historic decision, the Thai House of Representatives has passed a bill that would allow abortions during the first trimester of pregnancy. Abortion is currently illegal in Thailand unless under certain circumstances, such as if the abortion is necessary due to health reasons or if the woman was a victim of rape.

Under the bill, women who are up to 12 weeks pregnant would be able to have an abortion performed by a qualified doctor. Woman would not need to give a reason for the abortion. Abortion would still be illegal for women more than 12 weeks pregnant.

• A cosmetic surgeon is sentenced to 5 years in prison for the death of a woman who had a severe allergic reaction to a general anaesthetic during a facelift procedure.

The Thai Criminal Court sentenced the 51 year old doctor, and owner of the clinic in Bangkok, to jail for recklessness causing the death of the 72 year old patient and establishing a medical facility without permission and operating without the proper licensing.

After the patient showed an adverse reaction to the anaesthetic, the doctor pumped the patient’s chest, causing broken ribs, a ruptured liver and internal bleeding. leading to the patient’s death.

The patient’s daughter says the family has also filed for 200 million baht in damages in the Civil Court.

• Police have arrested a man who allegedly snuck around universities and schools, secretly recording videos under students’ skirts, then posting the footage on Facebook. The 28 year old man allegedly recorded 1,000 videos.

Police say the man has admitted to filming the videos. He allegedly told police that he has a history of mental issues and his actions were a “result of childhood trauma.”