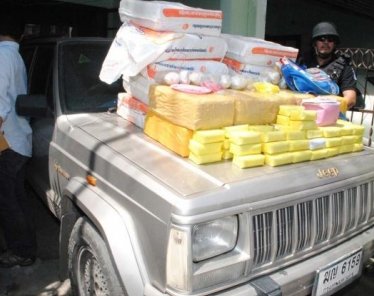 Suthi Suwanyusiri, 36, sustained six gunshot wounds and succumbed just outside of the townhouse where the cache was found.

“When he saw the police, he jumped out of the house and opened fire,” Pol Maj-General Suraphon Tuantong said, in his capacity as deputy chief of the National Police Office’s Narcotics Suppression Bureau.

His accomplice, Sittichai Krudtiang, did not attempt to flee or resist arrest. Also present in the house were Sitthichai’s wife, their child and another young relative.

“I am paid 20,000 baht each time I help him [Suthi] by driving a drug-loaded car to a destination,” Sittichai said. “I’ve done it many times before.”

Tuantong said that police had been monitoring the duo’s movements for a month and it was clear they were engaged in drug trafficking.

In the early hours of yesterday morning, Suthi drove a pickup truck to the rented townhouse where Sittichai was staying. Sittichai got into the truck and headed for the Pattavikorn Market, where he got out and jumped into another vehicle that was loaded with the illicit drugs and already had its engine running.

“Sittichai then drove the Jeep back to his house and started hiding the methamphetamine tablets when we decided to move in,” Suraphon said.

National Police Commissioner General Priewphan Damapong said the huge amount of methamphetamine tablets came from the north of Thailand and were about to be sold in inner Bangkok.

“Available evidence suggests that this gang is linked to drug traffickers in the Klong Toei area,” he said.

Sittichai said he met Suthi at Khao Prik Prison in Nakhon Ratchasima, where they were both serving jail terms.

Corrections Department director-general Suchart Wong-ananchai reckoned that at least 200 inmates at the Nakhon Si Thammarat Prison might have been involved in drugs.

“Of them, 26 are very likely key traffickers, so we decided to transfer them to various other high-security correctional facilities,” Suchart confirmed yesterday.

He added that there are about 5,000 inmates at the prison with only 160 wardens.

“We suspect some inmates may have successfully hidden mobile phones somewhere in the prison, so we have decided to use signal-jamming devices,” Suchart explained.

He confirmed that he had assigned Corrections Department deputy director-general Kobkiat Kasiwiwat to draw up an efficient plan to prevent inmates, with possible aid from corrupt wardens, from engaging in illegal activities.

“We will pay close attention to the shop and medical room at the prison,” Suchart said.

An investigation is ongoing to determine how many corrupt wardens have helped inmates get banned items, such as mobile phones, for use at the prison.