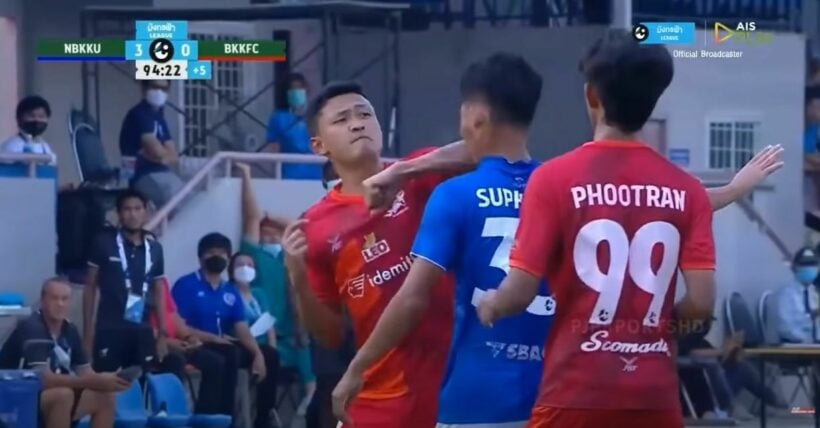 A Bangkok Football Club player who struck his opponent with a Muay Thai-style elbow strike to the face could receive a lifetime ban. Aitsaret Noichaiboon slammed his elbow into the player’s face, fracturing his cheekbone. He received 24 stitches on his upper lip and doctors say he also suffered a blood clot in his nose.

The football club terminated Aitsaret’s contract after the incident on Sunday. North Bangkok University was leading 3-0 during the end of the match when Supasan Ruangsuphanimit caught Aitsaret’s heels, who then ran up to Supasan and struck him in the face with his elbow. Supasan has since filed a complaint with the police.

The disciplinary committee of the Football Association of Thailand had a meeting on Monday to discuss the situation. Rather than using the standard competition rules, the committee chose to consider the matter using the FAT’s law on its players and officials, which has more severe penalties than those under the normal competition regulations.

A special committee will look into the matter, and the assessment will begin tomorrow. His license through the association could be withdrawn, and he could face a lifetime ban from participating in FAT-sponsored events.

riclag
Disagree strongly! He needs anger mgr classes ., together with 100 hours of instructional time teaching young Thai on the correct way to Wai ! Banning is the extreme! If he acts out again , then by all means yes
HolyCowCm
This was the other day. If you saw the hit on the news then you saw it was a rather brutal hit. So if he gets banned from football, then maybe if he has a degree from univeristy or gets…

AndyCousins
So you reported that the bus driver responsible for killing 8 whilst driving full of Class A drugs, 'May have his licence SUSPENDED', yet a footballer gets a life ban for an on field loss of temper.... Really...!