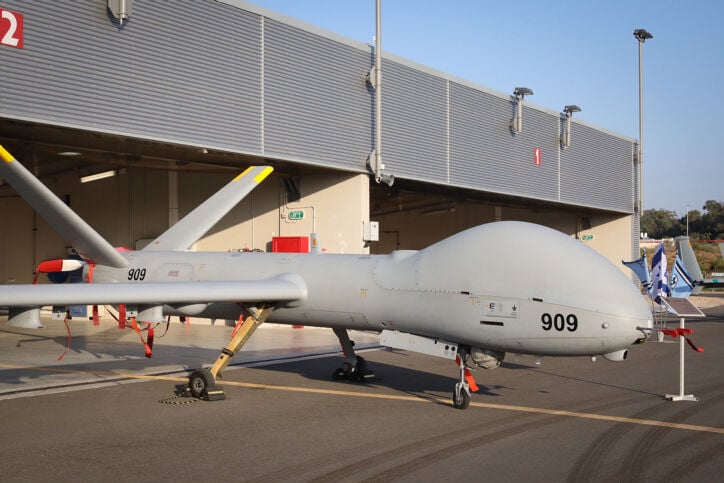 Thailand has signed a contract to buy Hermes 900 “unmanned aerial vehicles” (UAV) from an Israeli defence company, according to an announcement made today by the Royal Thai Navy (RTN). The purchase will cost 4 billion baht ($US107,003,360).

The pilotless aircraft will patrol Thailand’s seas to “protect the sovereignty of Thailand’s waters and shipping routes.” The drones will also assist in sea rescue missions, said the navy.

The Hermes 900 drones will help to prevent and suppress illegal activities out at sea, said the navy. The UAVs are complete with a weapon system which can accurately “attack targets,” added the navy.

The navy agreed to buy the drones for 4 billion baht from Israeli defence electronics company Elbit Systems Ltd. The navy didn’t say how many drones were included in the deal, but a budget has been allocated to procure the UAVs over four years from now until 2025.

Commander-in-Chief of the RTN Admiral Somprasong Nilsamai signed the contract with the Director of Business Development and Marketing of Elbit Systems Ltd. Nissim Assaf Cohen.

A Hermes 900 drone can fly for over 36 hours at a time, reach a height of 36,000 feet and fly in any weather conditions. The drones are already being used in Israel, Chile, Mexico, Colombia, Switzerland, Philippines, Canada, Greece, Iceland, Brazil, and Singapore.

In 2017, the RTN purchased Hermes 450 UAVs – the previous model of the same aircraft – from the same company, Elbit Systems Ltd.

The drones could help to locate people lost out at sea so that they can be saved by the navy. Last week, two tourists got swept out to sea off the coast of Rayong province when they got thrown out of their kayak in choppy conditions.

One of the tourists sadly died and the other clung to his body all night and was rescued by a passing fishing boat the next morning.

Vigo
20 hours ago, Janneman said: Yup. You can catch illegal fishing ships with a drone, or with a good old patrol vessel. Rather useless if the owners can just hand over a little envelop to the right person and then…

Thaidup
15 hours ago, Cabra said: A surveillance drone can certainly cover a lot more area (land or sea). But why it needs a weapons system is beyond me. Are they going to use it to sink illegal trawlers or kill…
Janneman
3 hours ago, Vigo said: You don't understand  the Hermes drone capabilities: It is NOT a weapons platform. it is primarily a monitoring and surveillance system. Its payload capacity is only 350kg.  The optional weaponry it can carry  is for…
Vigo
17 hours ago, Janneman said: Well, I guess you are right. And indeed I do not know that much about drones. The article mentions 'weapon systems'  and 'attack targets'. Which is clearly something else than monitoring sea lanes etc. Does…
HiuMak
For one that is always sitting on the fence profiteering on situations, I did not know that it has so many enemies.