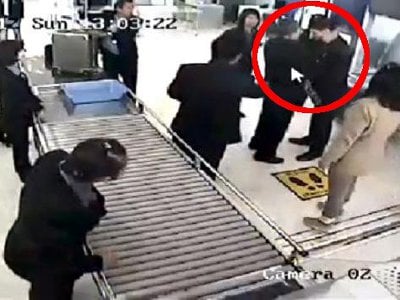 PHUKET: The senior Thai Customs official caught on video slapping a security worker has been transferred and faces a misconduct investigation following the explosive reaction to his antics being posted on YouTube.

Suvarnabhumi Airport Police yesterday issued a summons for 55-year-old Sombat Chatchaiwaiyawit to present himself for questioning after a video was posted to YouTube showing him assaulting an airport security officer and refusing to be scanned with a hand-held detector at an airport security checkpoint.

Mr Sombat is the chief of the Thai Customs contraband and narcotics unit at Suvarnabhumi Airport.

“Mr Sombat Chatchaiwaiyawit has seven days to respond to the summons. If he does not report to police, we will issue a warrant to arrest him,” said Pol Col Nattanan Nanasombat, Superintendent of Suvarnabhumi Airport Police.

The video clip shows Mr Sombat walking through a security checkpoint at the airport. The walk-though detector sounded the alarm when he passed through, prompting security official Sirichai Maichum, 33, to follow standard security procedure and scan him with a hand-held detector.

Mr Sombat didn’t like that, refused to be searched and then visibly lost his temper. He began berating Mr Sirichai and then slapped him with both hands on the ears.

Mr Sombat then pointed to his badge, indicating his position and rank, which prompted Mr Sirichai to bow to him humbly several times and offer his repeated apology.

The video on YouTube is now hugely popular. As of this afternoon it had gained more than 1.2 million views since being posted.

“If he is found guilty of misconduct, he will face action in line with the rules of the Office of Civil Service Commission,” said Mr Somchai.

“His actions have caused serious damage to the reputation of the Customs Department and it is unacceptable,” he added.

Mr Sirichai, the security official who was attacked by Mr Sombat, works for Asia Security Management (ASM), a Loxley subsidiary that provides security services at the airport.

He filed a complaint against Mr Sombat after a doctor had confirmed he had sustained damage to his left eardrum.

“Mr Sirichai has always carried out his duties well, and from the clip we can see that he did nothing wrong,” said Passakorn Aksornsuwan, ASM’s human resources manager.

“The company has covered Sirichai’s medical expenses and given him days off until he is fully recovered. He will resume his regular duties [after that],” he added.