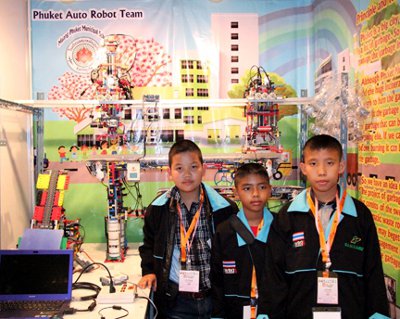 PHUKET: Three students from Phuket Municipal School in Phuket Town have been honored with a meeting with Yongyuth Wichaidit, Deputy Prime Minister and Minister of the Interior, for their award-winning performance at the World Robot Olympiad (WRO) 2011 in Abu Dhabi, United Arab Emirates.

In honor of their achievement, Deputy Prime Minister Yongyuth Wichaidit held an audience for the three boys in Bangkok on January 6.

As reported by the Phuket Gazette last September, the Phuket team created a Lego robot this year that reproduced the process of garbage collection and separation.

“The students are proud to help create a strong [robotics] reputation for our country,” said Mr Sophon.

“It was a good experience for them to be a part of the world competition, which will improve their future skills. Just observing the different teams from around the world and the various techniques they used was a big help for them,” he said.

Mr Sophon said that the results of the competition proved that the techniques being used by Phuket Municipal School’s team were good and could beat other countries.

“Phuket City Mayor Somjai Suwansupana, who always stresses the importance of education, is quite proud of our students also. She will continue to support the project,” Mr Sopon said.