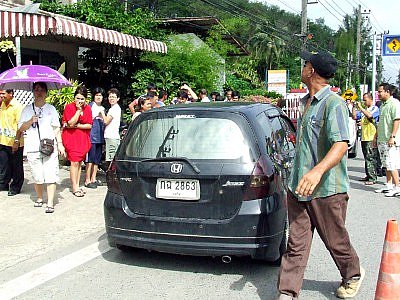 PHUKET: Police suspect reporting on illegal issuance of titles for prime Phuket land as a possible motive for the assassination of Wisut “Ae Inside” Tangwitthayaporn in broad daylight during rush hour on a major Phuket thoroughfare today.

The news was announced at a meeting of some of Phuket’s top police officers this morning.

“We held the meeting to discuss how to catch the assassins,” said Phuket Provincial Police Deputy Commander Pornsak Nuannhu.

Specifically, officers are considering the coverage by Mr Wisut’s newspaper, Inside Phuket, of suspected fraud in the issuance of title deeds for prime land at Freedom Bay south of Patong and at Nakalay Point in Kamala.

However, Col Pornsak added that Phuket police were also investigating gambling debts and conflict over a romantic relationship as possible motives.

“We have to further investigate the matter and question witnesses before determining the actual motive behind the killing,” he said.

No less than five teams of officers have been assigned to investigate the murder, he said.

“They will carry out their investigation throughout Phuket and nearby provinces. They will also try to determine the motive for the assassination,” he said.

“I am coordinating with police so I can keep a close eye on the case…. This is a serious case and especially challenging due to the victim’s role in the media and because it happened in such a public area with many witnesses.

“I am unsure why he was killed. He had reported on the problem of land title deeds in Phuket, which is a continually recurring issue,” he added.