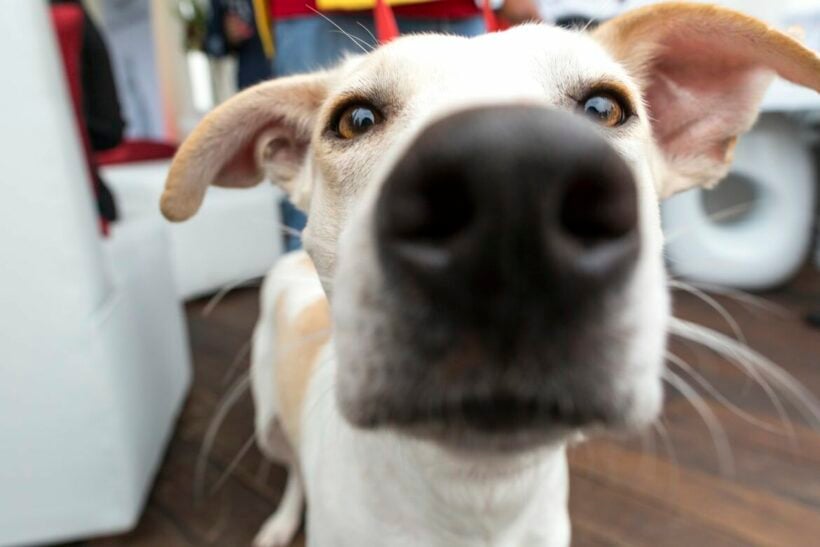 Thai customs and livestock officials now have trained dogs sniffing for pork that could be smuggled over the Laos border. This news comes after about 300 kilograms of pork were found at a dump near the moon river yesterday. Officials think a pork trader who hoarded too much pork might have dumped it there. They have deployed the dogs at a border checkpoint in Sirindhorn, a district of Ubon Ratchathani province.

Thailand faces a pork shortage after pigs on several farms have been infected with African Swine Fever. The disease has spread across at least 13 provinces, and farmers have had to slaughter and bury pigs to prevent it from spreading. In January, livestock authorities accused a company of pork hoarding after they found 200 tonnes of pork in a refrigerated warehouse in Songkhla. The company denied hoarding, and said the meat belonged to its subsidiary and they were storing it in the warehouse to meet consumers’ demands for the next week.

The sniffer dogs are checking all cargo trucks coming from Laos, even though officials noted that smuggling meat from Laos would be hard because of how few refrigerated trucks Laos has.

TheDirtyDurian
Reminds me of my pork smuggling days bringing stuff over from Bahrain to Saudi.
HiuMak
8 hours ago, Rookiescot said: Think thats a bit harsh. Genuine pork will be allowed over the border so long as its registered as such and meets hygiene standards. I believe this is to prevent sub standard pork entering the…
Rookiescot
1 hour ago, HiuMak said: Registration or standards are a means of more $$$$ for the authorities Every cloud has a silver lining 😃

longwood50
It use to be drugs and the Golden Triangle.

Marble-eye
The Thai police never used to bother about illegal piggygrunts but when people began smoking pork that put a complete new dimension to it.