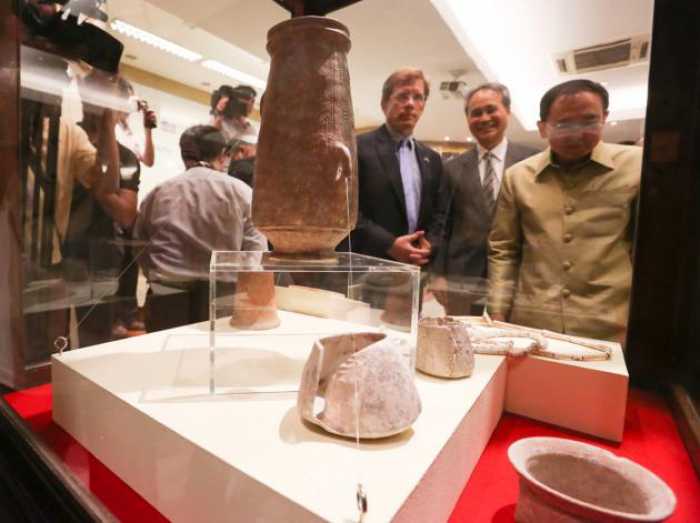 PHUKET: Twenty-six years after the return of the Narai Stone lintel from the Art Institute of Chicago to Thailand, the US government has again officially handed over more ancient artefacts to the Kingdom.

“Cultural artefacts help form our national identity. All countries are subjected to these internal crimes and it’s our priority to [set it right],” Patrick Murphy, charge d’affaires at the US Embassy, said at the official handover ceremony at the National Museum in Bangkok. “Some 700 artefacts are being brought back home, rightfully delivered to the hands of the people of the Kingdom of Thailand.

“Around the world, our countries are open to these criminals to steal and perpetuate these kinds of cultural trades. Even in the United States we have been targeted by these crimes. Over the past seven years, nearly 7,000 items have been returned to some 30 countries around the world, including this region. It’s a very good news story that today Thailand has joined those countries, retaking the ownership of the artefacts that should not have left the Kingdom,” Murphy said.

Culture Minister Vira Rojpochanarat said: “On behalf of the people of Thailand, I wish to express my heartfelt appreciation to the US government for its kind support in delivering the artefacts back to their rightful place.

“I would like to extend our gratitude to the Ministry of Foreign Affairs and the Embassy of the United States for their collaboration and affiliation, which highly contributed to the success of the mission.”

The US government – through the California attorney-general’s office – returned these latest artefacts on October 3, after signing a non-prosecution agreement with the relevant US authorities.

The artefacts are being kept at the Kanjanapisek National Musuem in Pathum Thani province.

Vira said they consisted of 222 pottery pieces, 197 bronze ornaments, 79 bronze instruments, 35 beads, 11 stone instruments and stone axes, and 10 sandstone items. Most of them originate from the Ban Chiang archaeological site in Udon Thani.