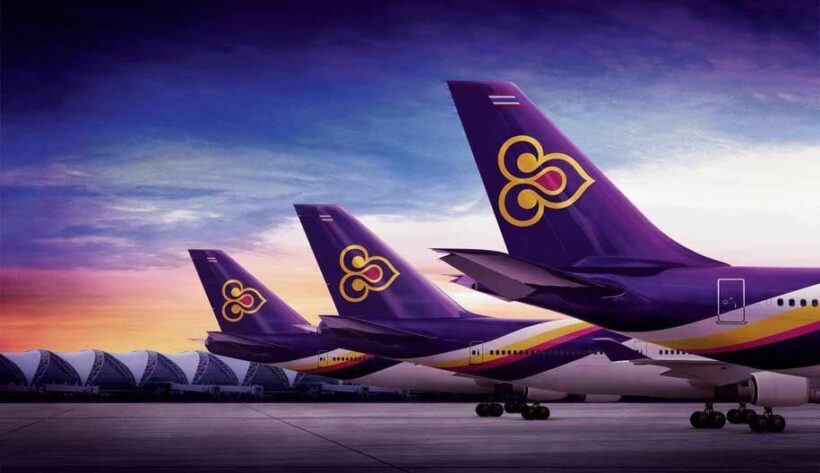 Beleaguered national airline Thai Airways says they’re resuming full service on 36 foreign routes to destinations in Europe, Asia and Australia, many of which will resume from October 31. The implementation is in step with the Thai government’s commitment to reduce many of the impediments and restrictions to international arrivals from November 1.

The decision was announced today by Thai Airways Executive Vice President for Commerce Non Kalinta. The massively expanded and updated schedule will operate as the airline’s winter flight plan, going into effect on October 31 and following the flight schedule until March 26, barring any unforeseen circumstances.

The airline launched a set of flights planned specifically to support the Phuket Sandbox programme, as well as a wide range of flights hubbed in Bangkok, connecting the capital city with key locations throughout Asia, Australia, and Europe.

Thai Airways will operate 7 routes to support the Phuket Sandbox, 19 across Asia – particularly Southeast Asia and South Asia – 9 to Europe, and 1 to Australia. They will fly to Sydney from Bangkok and return, with flights departing from Bangkok on Wednesdays and Sundays.

The 7 Sandbox supporting flights are as follows:

Thai Airways routes launching between Bangkok and Asian destinations are as follows:

Thai Airways routes launching between Bangkok and European destinations are as follows:

Artemis080
46 minutes ago, Marc26 said: We are so spoiled in Vancouver  We have every Asian airline besides Singapore  And that in itself is a very sad story. No SQ for you.
Cathat
13 hours ago, JamesE said: Too bad freaking Taiwan is closed until the end of the year. I hope EVA can survive on cargo alone. Eva are in good shape,the global freight rates are up about 400 percent. The parent…

PapayaBokBok
20 hours ago, Disenfranchised said: EVA by to the west coast and NY and Korean Air to the southern states. Never had a bad flight with EVA or Korean Air with never more than a 2 hour layover either in…

PapayaBokBok
15 hours ago, BainaiThai said: I always use EVA as Ive had good results on red eyes out of LAX to TPE to BKK My go to carrier for this flight. same --so it was you i sat next to last…
Jaizan
On 10/14/2021 at 2:43 PM, BigO said: So there are 15 flights to four cities in Japan, but they aren’t allowing Japanese travelers to participate in quarantine-free travel. I know that these flights are for connecting US flights, but the…