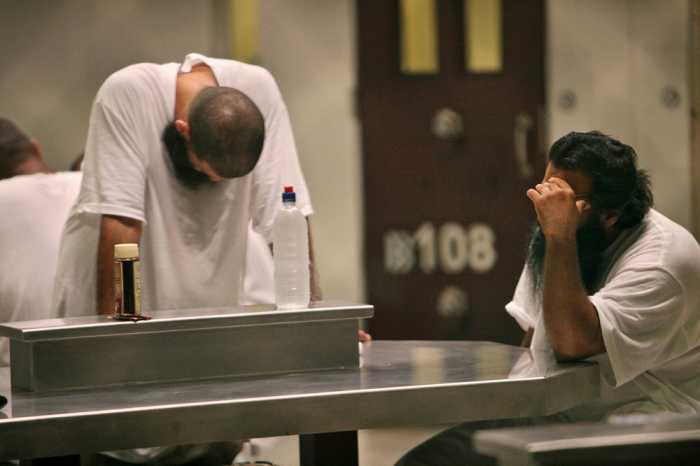 PHUKET:Six men held for more than a decade at the U.S. military prison at Guantanamo Bay, Cuba, were flown to Uruguay for resettlement on Sunday, the latest step in a slow-moving push by President Barack Obama’s administration to close the facility.

The release of four Syrians, a Tunisian and a Palestinian, who arrived in South America aboard a U.S. military transport plane, represented the largest single group to leave the internationally condemned U.S. detention camp since 2009, U.S. officials said.

Obama promised to shut the prison when he took office nearly six years ago, citing the damage it inflicted on America’s image around the world. But he has been unable to do so, partly because of obstacles posed by the U.S. Congress.

The latest transfer of prisoners to Uruguay had been delayed for months. A move initially planned earlier this year was apparently held up by the Defense Department.

Differences over the pace of such transfers, said one U.S. official, added to friction between Defense Secretary Chuck Hagel and Obama’s inner circle that culminated in Hagel’s resignation last month.

The release of the six was put off again in August when Uruguay became concerned about political risks in the run-up to its October presidential election. But outgoing President Jose Mujica then pressed ahead with the transfer.

Mujica, who has called Guantanamo a “disgrace,” reiterated in an interview aired on Friday that he had rejected a U.S. proposal to ban the detainees from traveling for two years after their release from Guantanamo.

“They are coming as refugees and the first day that they want to leave, they can leave,” he said in an interview with state television that was posted on YouTube.

A U.S. official said Uruguay agreed to “security arrangements” and that the six would be “free men.” He declined to say whether they would be allowed to travel abroad.

Uruguay’s president-elect, the ruling party’s Tabare Vazquez, who takes power on March 1, has said he also supports hosting the men as a humanitarian gesture. The Uruguayan Foreign Ministry said in a statement on Sunday that it would adhere to international rules on humanitarian protection.

Guantanamo was opened by Obama’s predecessor, George W. Bush, after the Sept. 11, 2001, attacks on the United States, to house terrorism suspects rounded up overseas. Most of the detainees have been held for a decade or more without being charged or tried.

After arriving in Montevideo, the six men were taken to a hospital for medical examinations, the U.S. official said.

“We are very grateful to Uruguay for this important humanitarian action,” said Clifford Sloan, Obama’s State Department envoy on Guantanamo, who negotiated the resettlement deal in January.

“The support we are receiving from our friends and allies is critical to achieving our shared goal of closing Guantanamo, and this transfer is a major milestone.”

Seven other prisoners have been transferred from Guantanamo since early November, including three to the republic of Georgia, two to Slovakia, one to Saudi Arabia and one to Kuwait. With Sunday’s release, the prisoner population has been whittled down to 136.

The detainees released on Sunday were cleared for release long ago and are not regarded as security threats. But U.S. authorities did not want to send them home, saying countries such as Syria, where a civil war is raging, were too risky.

Among the Syrians sent to Uruguay was Jihad Diyab, who recently mounted a legal challenge against the U.S. military’s force-feeding of hunger strikers at Guantanamo. A lawyer for Diyab, Cori Crider, said on Sunday the case to release videotapes of the force-feeding would continue despite the transfer.

Mujica, a former leftist guerrilla who was jailed during a 1973-1985 military dictatorship, had urged Washington to free three imprisoned Cuban spies as a reciprocal gesture, but U.S. authorities said that was never part of the negotiations.

More are expected to be repatriated or sent to countries other than their homelands by year-end, the U.S. official said.

Obama still faces major obstacles in trying to shut down the prison, among the biggest being the Yemeni detainees who make up more than half the inmate population. Most have been cleared for transfer but are unable to return home because of the chaotic security situation in Yemen.

There are concerns in Washington that some might return to the battlefield. Yemen is the base for an al Qaeda affiliate that was the target on Saturday of a U.S. hostage rescue attempt, which ended with an American journalist and a South African teacher being killed by their captors.

All six of the men released on Sunday were originally detained because of suspected links to al Qaeda but not charged.

According to a database of Guantanamo detainees made by the New York Times and National Public Radio of government documents, some of which were classified and obtained through a leak, the government said Diyab, 43, was detained in Lahore, Pakistan, in 2002 and transferred to U.S. custody and then to Guantanamo that year.

Ahjam, 37, spent around a year in Afghanistan, and was detained in Pakistan in December 2001 after he and others fled fighting during the U.S.-led war to destroy al Qaeda and oust the Taliban accused of harboring the group, the documents say.

Faraj, a Syrian born in 1975, was captured by Pakistani authorities while trying to enter Pakistan and transferred to U.S. custody in Afghanistan and then to Guantanamo in June 2002.