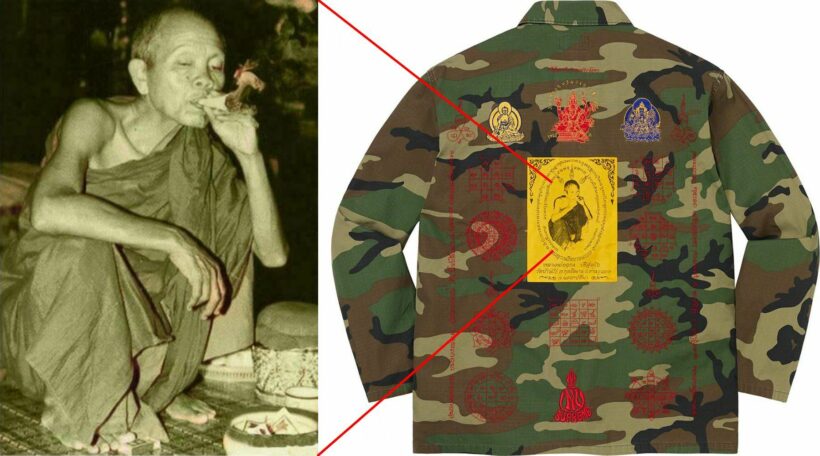 PHOTO: Supreme now has the temple's permission to use the monk's image. (via Pinterest)

Wat Ban Rai, a small temple in Nakhon Ratchasima, has reached an agreement with popular streetwear brand Supreme for using an image of their monk. In February the temple became aware that the global clothing brand was using a stylised photo of a well-known monk from their temple, Luang Por Khun, without having ever asked permission. They had threatened lawsuits and other legal action until the settlement was reached.

Luang died at age 91 in 2015 and donated his body to Khon Kaen University for study, after which he was cremated in 2019. Before his death, he was popular throughout Thailand with many believing that he possessed magical power. People would visit him with belief that his blessings could protect them from danger and even gunshots.

The photo had been taken around 2003 and he had given permission for it to be used on t-shirts locally to raise money for the temple itself. But relatives and Temple members were shocked to see the image of the monk squatting and smoking an enormous cigarette with a sacred “yant” script encircling him appear on a trendy t-shirt from Supreme, a fashion company based in New York.

The temple manager said they finally received a written request asking for permission to use the image of the late monk on 1,000 Supreme t-shirts. They reached an agreement when Supreme pledge to donate a portion of the proceeds to the temple.

Relatives and religious officials criticised Supreme for using the monk image as Thai people don’t use such sacred images as decoration and are sensitive about the destruction of such images which could inadvertently occur with a carelessly discarded old t-shirt. They had previously tried to explain these reasons to the clothing brand.

The threats of a lawsuit have now been dropped and it appears the Supreme monk shirts will now be sold with the temple’s blessing and with an undisclosed portion of the profits being donated to the temple.