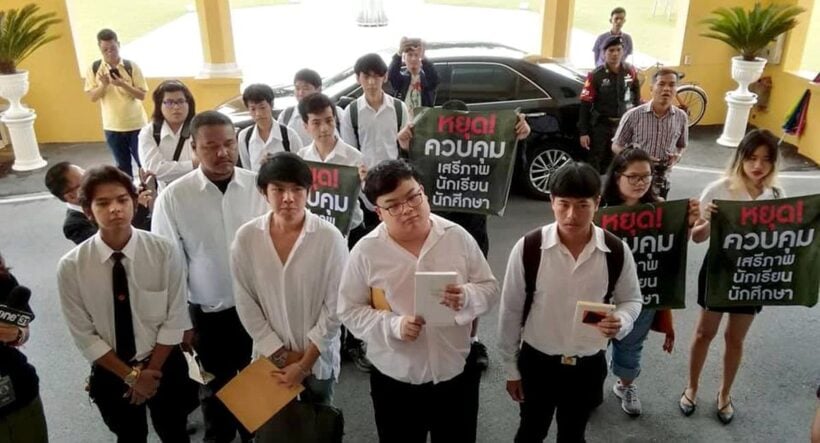 Read the report about the ‘moral’ crackdown HERE.

Citing a serious infringement on privacy and their rights to political expression, the union, led by activist Parit “Penguin” Chiwarak, submitted a letter asking the Education Ministry to cancel the plan on Friday. They carried banners saying “Stop taking away our freedom!”

The Cabinet had approved the Education Ministry’s revamp of the regulations on August 14, which prohibits students from public assembly that may cause disorder or are against good morals. It also bans inappropriate acts of affection, as well as acts that cause public nuisance. Violators would receive warnings, have their holistic points taken off, or undergo behavioural changing activities.

Once published in the Royal Gazette, the regulation will be fully enforced.

The union found the prohibition of public gathering too broadly defined and may be aimed at taking away their freedom to express political ideas or organise political rallies.

“What if public gatherings are interpreted to include expression of [political] ideas, how can students like us express our opinions about the government and the Education Ministry?” asked Parit.

“We want the regulation cancelled and students’ rights protected,” he said.

Education Ministry spokesperson Karun Sakulpradit promised the regulation would never be used for political ends. He said public gatherings in the regulation did not include political expressions or actions, but target students engaged in brawls, speed racing and drugs.

“The regulation will not be twisted [to achieve political purposes]. It is not a political agenda,” he confirmed.

Education Minister Dr Teerakiat Jareonsettasin gave assurances the new regulations were not a political move. The regulations needed to be revised in line with modern society, he said.