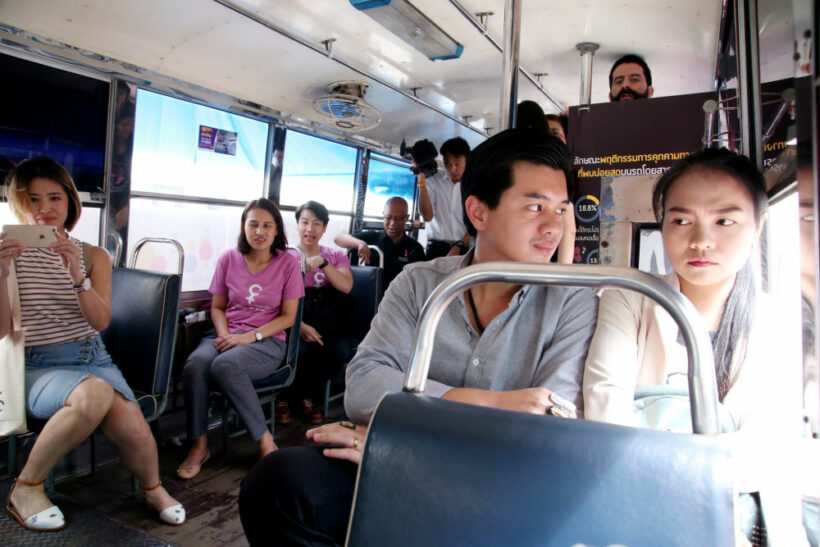 “I’ve seen women in Thailand begin to collectively speak out, sharing their stories and pushing back on this victim-blaming which previously has gone completely unchecked here.”

A recent survey of 1,107 Thais found that 21% of respondents say they have experienced sexual harassment.

The survey was conducted by YouGov, a UK-based market research company.

According to the survey, most experiences of sexual harassment took place at public places, such in public transportation (27%), nightclubs (18%), schools and universities (17%).

While one in five Thais have experienced sexual harassment, more than half of the respondents (57%) told someone that they had been sexually harassed.

Of this percentage people are more likely to tell a friend (55%) or family members (39%) than the police (10%). Men were more likely to report their experiences of sexual harassment than women.

According to theaseanpost.com, a common recurring theme in several ASEAN countries is victim-blaming. Thailand, while being one of the more progressive member states in ASEAN is not free from this practice either.

In March 2018, authorities in Thailand came out telling women to avoid dressing in “sexy” outfits as they tried to prevent sexual harassment or sex assault cases during the popular Songkran festival, including the Thai PM Prayut Chan-o-cha.

Later, in November 2018, The Nation published an opinion piece in which the writer noted that no sexual harassment case in the country has ever gone to court, adding that legally, “sexual harassment doesn’t exist in Thailand.”

“To say sexual harassment doesn’t exist in Thailand doesn’t mean that improper behaviour doesn’t occur. The term is a legal one, though, and in this country the public rarely hears about what happens. Reactions to the occasional incidents that do emerge are flash in the pan at most, and no case has ever gone to court.

“Our culture is not one that is so confrontational, and it’s going to be a while until a woman comes out and names names or points a finger in the media. But over the last few months, I’ve seen women in Thailand begin to collectively speak out, sharing their stories and pushing back on this victim-blaming which previously has gone completely unchecked here.”