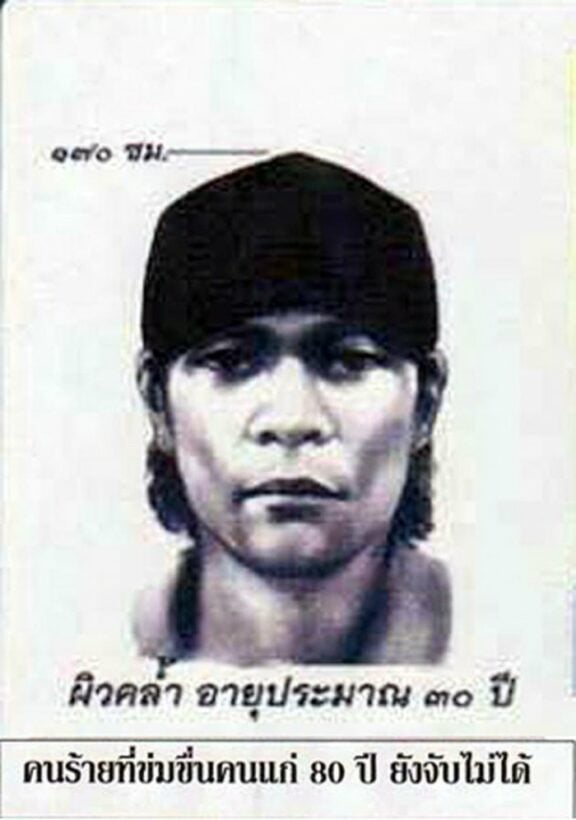 PHUKET: The Crime Suppression Division (CSD) has put the much-sought serial rapist who assaulted several elderly women in recent years on its “most wanted” list and has issued details of his crimes in 5,000 leaflets that will be handed out to locals in target areas.

CSD acting commander Col Akaradej Phimolsri announced the decision yesterday and called on people to come forward if they have any tips.

The leaflet also contains details on the crimes committed in each of the 10 assaults, along with a write-up that describes the suspect “as a non-human who engraved the brand of sin on the victims who are endeared by their children and grandchildren”.

The leaflets also describe the suspect’s features: a male between 35 and 45 years of age, compact but of strong and muscular build, 165-175 centimeters tall, dark complexion with rough palms, wearing a cap or a hoodie and travelling on a bicycle.

The suspect also stole a well-known Buddha amulet and a 6.35mm caliber Mauser pistol with registration number 43035 from two victims.

The hunt for the suspect was ramped up after a man broke into a house in Nakhon Pathom early on January 25 and raped an elderly woman and stole valuables.

Police believed the attack and robbery were linked to nine other rapes.

Before the latest case came to light, police had already begun to focus on trying to catch the serial offender.

Most of his victims were aged in their 70s, and two were murdered.

“We will scour the area within a 10 kilometer radius from the latest crime scene in a bid to nail the culprit,” Assistant National Police Commissioner Lt Gen Sopon Pisuttiwong said yesterday.

He spoke after leading a team of officers to inspect the house of the latest victim, 73.

“We expect to arrest the suspect soon,” Gen Sopon said. He said evidence suggested the attacker may be the serial rapist police have been chasing.

On Saturday, police publicly |disclosed they were hunting the offender.

“According to his victims, he is about 170 centimeters tall and in his 40s. He is robust and strong,” Sopon said.

Speaking from his home by a canal in Nakhon Pathom’s Nakhon Chaisi district, the 43-year-old son of the latest victim said he slept in his paddy field yesterday because a pump was turned on.

He said he was deeply shocked when he saw his mother exit the house in tears in the middle of the night.

“She told me a man broke into the house, entered her bedroom, and raped her at knifepoint,” he said, adding that the attacker stole valuables and killed the family’s dog with poison.

He said the offender took a gold-framed amulet, a cell-phone and Bt5,000 in cash.

“My mother saw part of his face. He partially removed his hood during her ordeal,” the son said.

DNA tests have confirmed that one man is responsible for 10 sexual attacks targeting elderly women.

The repeat offender, however, is still on the run even as police have launched a manhunt covering the provinces of Ratchaburi, Nakhon Pathom, Samut Sakhon and Samut Songkhram.

“Call 191 or 1599 if you have any tip-offs,” urged police spokesman Lt Gen Prawut Thavornsiri.

Police are offering 200,000 baht for any tip-offs that can lead to the arrest of the serial rapist, who also killed two of his victims. Gen Prawut said the money for the bounty came from people who want to help the police nail down this repeat offender.

He was speaking after holding an hours-long meeting with several senior police officers, including the Office of Police Forensic Science acting chief Lt Gen Manu Mekmok and Provincial Police Region 7 commissioner Lt Gen Weerapong Cheunpakdee. “We will try to track down the culprit as soon as possible,” Weerapong promised.

Meanwhile, the deputy police chief quoted the most latest victim as saying that the attacker was wearing a long-sleeved, deep-blue T-shirt with the word “Prasert” printed on the left-side of the chest.

“There were some small letters under the word, so we believe the T-shirt might have been a complimentary gift to customers. If we can trace the origins of the T-shirt, we should come closer to identifying the culprit,” he said.

He added that local police in target areas had been instructed to contact shops and T-shirt factories to look for relevant information.

“We are checking all the possible clues,” Gen Worapong said.

He also visited the latest victim later in the day. The woman has moved to her relative’s house after being attacked in her own home.

Assistant national police chief Lt Gen Sopon Pisuttiwong said a war room would be set up to facilitate efforts to track down the culprit.

“We may not be able to specify the time frame, but we will definitely arrest him,” he said.

According to Gen Sopon, the war room will be used to monitor progress on the ongoing investigations in various aspects and facilitate relevant operations.