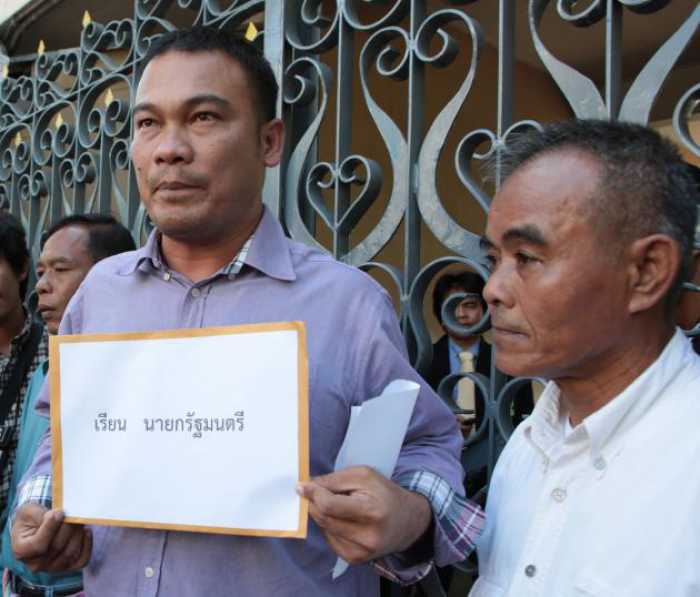 PHUKET: Disgruntled rubber farmers said yesterday that they were giving the government a few more weeks to push the price of rubber up to at least Bt80 per kilogram, or they would kick off massive rallies.

The ultimatum was issued when groups of farmers began protesting in various provinces, including Krabi, and the government said the price of rubber would not rise higher than 60 baht per kilo.

“The government has until the end of December to find solutions for the rubber-price problem,” Sunthorn Rakrong, a coordinator for Rubber Farmers’ Saviour Front, said yesterday.

He said farmers would start pressuring PM Prayut Chan-ocha directly if the price of rubber did not rise.

“When the new year begins, I won’t help keep angry farmers away any more if the price of rubber is still low,” he said. Sunthorn led many rubber farmers to Government House yesterday to read out a statement and submit a petition to the prime minister.

Deputy Agriculture Minister Amnuay Patise was given the job of dealing with the protesters, and after emerging from a Cabinet meeting, he said it was not possible to approve the rate of 80 baht per kilo.

He said he did not expect the price to rise beyond 60 baht at around the end of this year, despite the many government measures.

Prayut separately said the government had no plan to buy rubber from farmers to boost the price but would try to ask the private sector to pay 60 baht per kilo. “The private sector is considering our request,” he said.

According to Amnuay, the rubber price in neighboring countries has also dropped. “We would heed the farmers’ demand if it were possible,” the deputy minister said.

He added that the Cabinet had approved a 10-billion-baht budget to shore up the price of concentrated latex.

Sunthorn complained that the government had wasted a massive amount of money, because the measures it was spent on failed to help rubber farmers.

“Giving a subsidy of 1,000 baht per rai doesn’t really help, because some farmers don’t own the land and can’t claim the subsidy,” he said.

Yesterday, rubber farmers staged protests in the provinces of Chumphon and Surat Thani, and were to hold similar protests today in Prachuap Khiri Khan and Trang provinces.

Red-shirt Arisman loses appeal, gets a year in jail