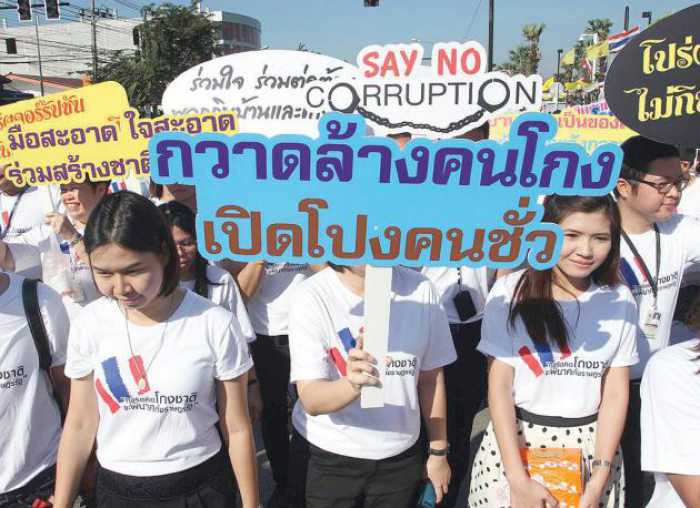 Such community action is necessary for the Kingdom’s development and position in the international arena, he said. Panthep said prevention was as important as prosecution of corruption cases, as law enforcement alone was not enough to solve the problem.

In the past few years, he said, the NACC has pressed on with “preventive measures against corruption, criminalisation of corrupt practices and [encouraging] international cooperation”. It also had to “push forward legislative amendments for more effective law enforcement, assets inspection and cultivation of anti-corruption values”.

Panthep was speaking at a gathering to mark International Anti-Corruption Day sponsored by the United Nations Convention against Corruption.

The designated day originated from international consensus to fight graft and the detrimental effects of corruption on a country’s development.

The NACC seminar welcomed both local and foreign guests, such as Australian Ambassador Paul Robilliard and Elodie Beth, regional anti-corruption adviser to the UN Development Programme.

NACC member Pakdee Pothisiri told the seminar the commission was moving in the right direction and its recent efforts had been satisfying. The Corruption Perceptions Index (CPI) that came out this year saw Thailand move up in ranking – from below 100 in the previous year, to 85th now.

However, he said the current CPI score of 38 out of 100 could be improved to over 50, which was the “pass mark” set by Transparency International.

He claimed that the military’s ruling National Council for Peace and Order had initiated a serious anti-graft agenda that showed the administration’s political will – something lacking in recent years – and stressed its importance for the country’s progress in fighting corruption.

“We need support from the government, business and citizen sectors to be successful,” Pakdee said, adding that 2015 “will be an important milestone – when the NCPO joins hands with the NACC to tackle graft by laying out a strategy of true collaboration and clear focus, an evaluation process and financial support. This is a welcome sign”.

But merely fighting graft is not enough, he said, as measures to prevent corruption are also important. “The World Bank has suggested that no matter how much attention is given to prosecution, such a strategy won’t be effective without an emphasis on preventing corruption,” he said.

He said the challenge was to put the strategy into practice, such as setting targets of what is wanted from various sectors. For youth, as an example, anti-graft lectures should be included in national curricula at the high-school level. He stressed that cooperation of citizens was vital in tackling graft. One of the NACC’s key missions was to create public awareness by building a moral conscience among children and adults. Pakdee said it was easier to create moral and ethical obligations among young people than in adults.