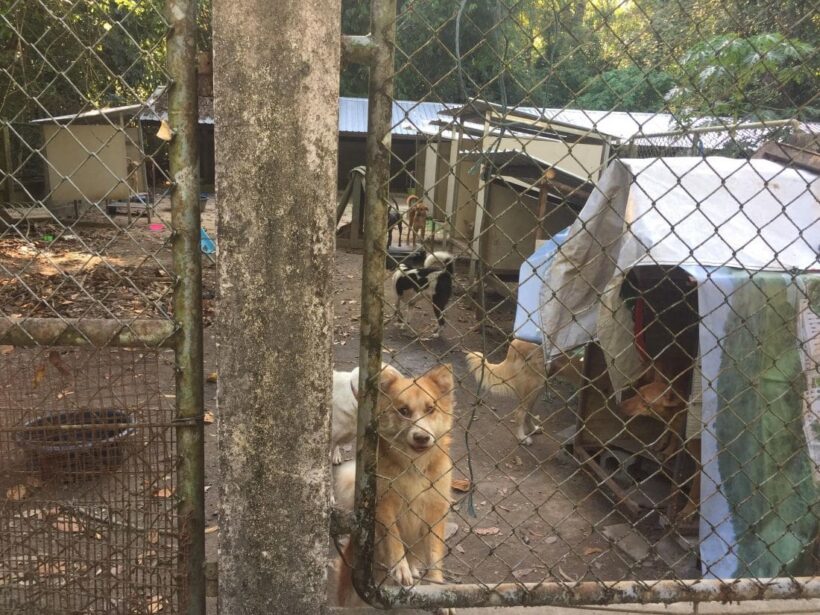 The scheme to control stray dogs recently announced in Bangkok is inappropriate and unlikely to be effective, according to Soi Dog Foundation (SDF).

The Thapthan shelter in Uthai Thani, where it is proposed that captured dogs will be impounded, is one of the best shelters in the country, but it is already at or near capacity.

The former Bangkok Governor and dog lover, Major General Chamlong Srimuang, built his own private shelter in Kanchanaburi province several years ago to house Bangkok strays. However, he is now looking to close it due to insufficient support. He recently visited the Thapthan shelter but was told they cannot take his dogs as the shelter is full.

In any case, even if the Thapthan shelter were empty it could house only a fraction of the capital’s street dogs. SDF has already carried out surveys of the 50 districts within the Bangkok Metropolitan area (BMA), and three years ago carried out a census in the whole Greater Bangkok area, which revealed approximately 640,000 free roaming dogs in Greater Bangkok.

The foundation agrees that aggressive dogs that bite people should be removed. But the majority of strays tend to steer clear of people, which is why people have to be trained in the skills of catching them.

With the support of Dogs Trust Worldwide, Soi Dog began sterilising and vaccinating the dogs living in the BMA area two years ago, as well as supporting other private initiatives in Greater Bangkok and other parts of the country. We currently have four full-time mobile teams operating in the capital and hope to increase that to six teams next year.

We are now close to sterilising 100,000 animals per year. This costs 50 million baht a year, with no support from the city. If sterilised and vaccinated dogs are going to be removed from their territories, then SDF will have to consider whether there is any point in continuing with such a programme.

The World Health Organisation, The Food and Agriculture division of the United Nations, The World Organisation for Animal Health (OIE) and the Global Alliance for Rabies Control, all agree that the most effective way to eliminate rabies is to vaccinate dogs, and if a minimum of 70 per cent of dogs are vaccinated in a city or country, then you will eliminate rabies, providing you control any new dogs coming in.

The reason for this is that mass vaccination establishes herd immunity. But remove those vaccinated dogs, and other dogs that are not vaccinated will rapidly reproduce to take their place, and rabies will once again raise its ugly head.

The same applies to population control. Sterilise 80 per cent of the female dogs and you will start to see numbers fall. Dogs are territorial and will keep other dogs out.

A maintenance programme will be required but, as has been shown in countries around the world, once sterilisation is introduced, as well as people exercising proper control of their dogs, then the situation will be under control.

You can see this happening in Phuket where SDF has been vaccinating and sterilising dogs for 15 years. Despite hundreds of unvaccinated puppies being allowed into the province for sale each year, and despite vaccinated and sterilised dogs being removed to the provincial pound from time to time (making the maintenance operation far harder) the number of stray dogs in Phuket has fallen drastically.

In addition, the government has declared the province rabies-free – the only province in Thailand to have received this accolade.

Bangkok has always had a big stray dog problem. Over the years, many measures have been tried and failed, including poisoning and shooting (stopped by the late King Bhumibol), and removing dogs to Pravet and Uthai Thani.

SDF believes that the latest measure announced will also fail.

Dogs, cats and rats, like people, need food to survive. Until the authorities can control the garbage and waste problem in Thailand, as they have now in many countries, then something is going to feed on that waste.

At present, dogs are top of the pecking order. Remove the dogs and the cat population will explode, as it has in Phuket. Remove the cats and the city will have a plague of rats and mice.

That is nature. Provide a food source and something will feed on it. It will take investment and education, but unless you solve the underlying issue – unsterilised animals and a ready source of food – you will never solve the problem.

You will need 100 shelters like Uthai Thani, or more, to take all of the dogs in the Greater Bangkok area. The cost of building them and then feeding and caring for the dogs, would be astronomical – certainly far more than employing a large number of people to catch the dogs, then sterilise and vaccinate them.

Even if it were possible to remove all the current free-roaming dogs in Bangkok, whether owned or stray, they would be replaced in no time at all by dogs from areas around the city, by unwanted pups discarded by puppy factories, and the offspring of unsterilised pets, the origin of all the current strays.

Educating people on responsible pet ownership, and that it is not wrong or against Buddhist principles to sterilise dogs and cats, is also essential.

Finally, it is worth noting that in September senior officials from the Singapore Veterinary Department, who have responsibility for controlling the stray dogs in that country, visited Soi Dog in Bangkok for three days to study our methods.

They have found that years of a capture-and-euthanise policy had no impact. They are now switching to a Catch-Neuter-Vaccinate-Release policy in close cooperation with local animal welfare groups.

Singapore has an estimated 10,000 strays only, but the principle is the same whether it be 10,000 or 10 million – which is the likely minimum figure in Thailand.

Lessons continue not to be learned in relation to controlling the number of stray dogs in Bangkok and, indeed, the rest of Thailand.

Once again, the Soi Dog Foundation urges authorities in the capital and elsewhere in Thailand to heed the lessons of the past and to commit to a concerted long-term campaign to catch, neuter, sterilise and release street dogs, and to make bringing garbage under control a priority.