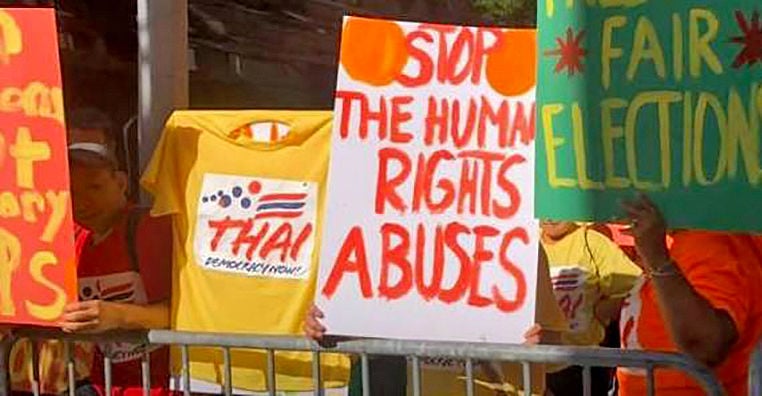 A small group of vocal protesters in New York, rallying in front of a hotel where the Thai PM was staying over the weekend, have been revealed to be Mexicans, Brazillians and Peruvians, not Thai. PM Prayut and his entourage were staying in the Plaza Athenee Hotel over the weekend and until Tuesday this week, attending events and UN Summits.

Thai TV reporters, stationed in front of the hotel, say about 30 protesters, wearing T-shirts bearing the Thai national flag and slogans, were holding posters demanding democracy through free and fair elections in Thailand.

When approached by one of the suspicious reporters whether they knew where Thailand is on the world map, the protesters admitted they had no idea. In fact, none of the protesters could speak Thai and most of them couldn’t even speak English.

The protesters arrived at the hotel at about 9am on the Thai PM’s last day. They didn’t meet with the prime minister who had left the hotel for the UN General Assembly earlier at about 7.30am.

Thai Senator Somchai Sawaengkarn has mocked the anti-Prayut protest, saying the people behind the protest are so desperate “that they had to hire Peruvians and Brazilians to protest in New York”.

Not 12 billion baht, only 4.2 billion! Price tag for Army helicopters.