Heading into today’s protest at Thammasat University in Bangkok, a spokesperson for the organisers says the thorny issue of the reform of the Thai monarchy will be on the agenda. A 10 point manifesto was prepared and originally announced as part of an August 10 rally, not a large rally at the time but memorable for the public utterance of issues regarding the Thai Head of State, previously a taboo topic in a public forum.

In lead up to the start of today’s protest, expected to draw a large crowd, Panasaya Sitthichirawattanakul, one of the organisers from the Thammasat Alliance group, says that the Thai monarchy will again” definitely be raised” at the University’s Tha Prachan campus.

She came to the attention of the public, and police, for daring to read out the 10-point manifesto at the August 10 rally, that time held at the Thammasat University’s Rangsit campus.

Panasaya, speaking to Thai PBS World, says she “understands the sensitivity of the Monarchy” and that many people disagree with them, because it is new in Thai society for the subject to be discussed openly.

“But I would like them (the opponents) to open up their minds and to listen to our demands for reform of the Monarchy, so that it will stay with us under the Constitution, in line with a modern society in the era of globalisation, and for the institution to be revered by the people.”

But her group faces an uphill battle with a conservative government in power, supported by an Army ardently loyal to the sovereign, and the powerful Bangkok ‘elite’ who control a large rump of Thailand’s businesses and officialdom.

The group does not enjoy the full support of all the other student protest groups with their calls for changes to the Thai monarchy. But on the issues of government, educational and constitutional reform, all the protest groups are united.

But Panasaya says that her group’s mission now is to keep the issue alive until reform is accomplished.  She acknowledges that cooperation from the Government and Parliament is essential for the success of any of the 10 points on their manifesto.

One of the sticking points in getting permission to hold today’s protest on the Thammasat Tha Prachan campus, adjacent to the royal parade grounds of Sanam Luang and the Grand Palace, was the very issue of discussing Thailand’s monarchy. On that, City officials say the Royal Plaza is also off-limits to demonstrators as well. University officials made it clear this week they were not comfortable about more open discussion on the issue on the grounds of their university. Since denying permission for the rally to go ahead on their grounds, they have remained silent on the matter.

Their position has not changed – the campus will be closed this weekend due to “security concerns”.

As of this morning there has still been no official permission for today’s rally to go ahead on the campus grounds although the protest groups have made it clear they will use the public spaces outside, or even take over the open field of Sanam Luang, which could inflame the situation further as a ‘snub’ to the country’s royal institution.

But Panasaya says the group has made it clear to university officials that this issue is “non-negotiable” and that it is their right to hold the rally on the grounds of the university.

“If they chain the gates, we will cut the chains. The venue is the soul of Thammasat, the symbol of the fight for righteousness, for justice against injustice and for democracy.”

The young protest leader also said that the protest organizers have arranged their own security and logistics, to ensure the safety of the venue and the protesters.

Among the points in the activists’ manifesto is the repeal of Thailand’s lèse majesté law which, they say, has discouraged people from discussing the issue in public in the past, reform to the role of the Thai monarch, the stepping down of the current prime minister, a new election and the writing of a new constitution.

This week royalists and right-wing political supporters, including a slew of the country’s non-elected senators, have made unfounded allegations against the protesters and the student organisations claiming, without evidence, that they are being “manipulated by opposition politicians and have received funding from them”.

On Thursday night the PM Prayut Chan-o-cha took to the airwaves with an address to the nation, aimed at the students (and the parents of the students), claiming that the protest should be postponed, citing the possibilities of Covid-19 infections and a “second wave”. He stoked the Covid fears even though Thailand had a 101 day run without any local Covid-19 infections (until 3 local infections were identified over the past 16 days).

Since the August 10 rally, when the issues of the country’s monarchy were first publicly uttered, there’s been a political stand-off as both sides, and the many in the middle, make sense of the new paradigm. Now Thailand faces a period where not only political change is being discussed, but also a period of open discussion about the revered monarchy and its future role in the nation.

Today’s protest event could end up as the first showdown with the two ‘camps’ facing off whilst officials and police will surely do their best to maintain law and order. But today’s biggest battle may not come from ground forces but rather from above, with a high likelihood of rain in Bangkok’s afternoon forecast. 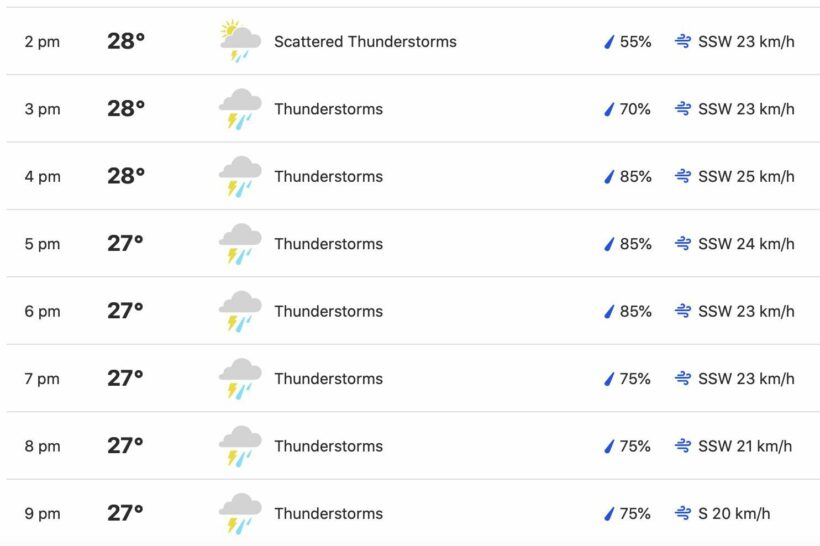