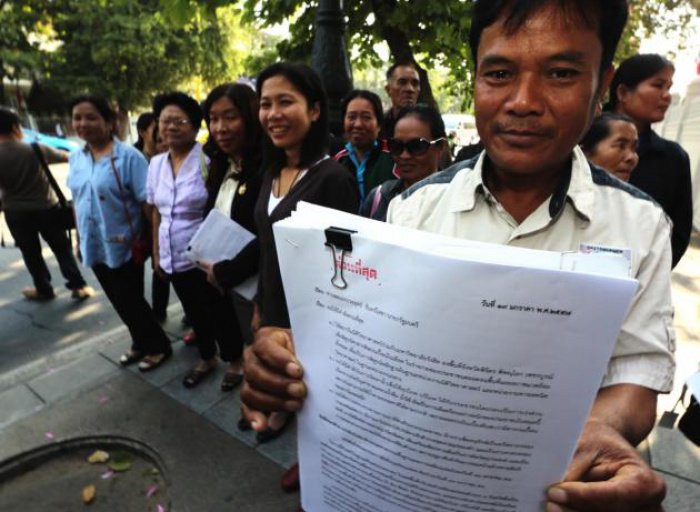 PHUKET: People living near a gold mine in the central north are calling for Prime Minister Gen Prayut Chan-o-cha to urgently intervene after hundreds of villagers were found to have heavy-metal contamination.

Wunpen Promrungsun yesterday submitted a petition to Gen Prayut yesterday on behalf of those affected by the Akara Resources gold mine.

The petition calls for Gen Prayut to order the Central Institute of Forensic Science (CIFS) and Rangsit University to jointly conduct tests on local people in three provinces who fear they have been affected – Phichit, Phitsanulok and Phetchabun.

“The tests will scientifically determine if people are contaminated with toxins,” the petition said. It also requested that potable water be provided to the locals.

“Local people are not able to use water from local sources as preliminary tests show it is contaminated,” the petition said.

Gen Prayut was also urged to review the process under which the mining licences were granted. The petition explained that many residents were made to vacate their land for so-called environmental conservation, but later found that their land was being used for gold mining.

“We hope the prime minister will act fast,” Wunpen said.

Later in the day, she also went to Rangsit University to meet president Arthit Ourairat with the hope of persuading him to dispatch a team to the three provinces to conduct blood tests on some 6,000 residents.

“We hope the government will provide funds for these tests,” Wunpen said.

Seukanya Thirachartdamrong, who represents those affected in Phichit province, said she hoped the prime minister would intervene fast as local residents were now frightened.

The Department of Primary Industries and Mines suspended the operations of the gold mine last week, after which locals heard several gunshots in the area and interpreted it as a form of intimidation.

“I’ve also heard that the gold mine is trying to launch a campaign in support of its operation,” she said.