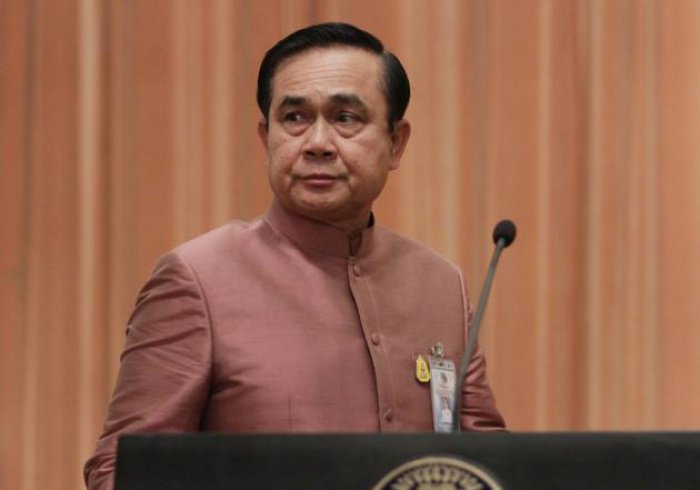 Gen Prayut was asked to comment on the claim by some politicians that the National Council for Peace and Order had signalled to the NLA to vote against the ex-premier on Friday, following a session of closing statements by Ms Yingluck and her accuser, the National Anti-Corruption Commission (NACC), the day before.

“Who made the order? I haven’t seen anyone do so. You should ask the people who told you. Don’t ask such a stupid question,” Gen Prayut said, speaking with emotion.

“I have never sent any signal. Never. There has never been an order,” he told reporters at Government House.

Ms Yingluck is accused by the NACC of negligence of duty in connection with her government’s corruption-plagued rice-pledging scheme, which is estimated to have cost more than 500 billion baht in state funds.

Support from at least three-fifths of the 220-member NLA is required for her to be impeached. If found guilty, the ex-PM will be banned from holding political office for five years.

Meanwhile, Ms Yingluck’s lawyer Norawich Lalang said the former PM did not appear to be worried about the case ahead of her closing statement before the NLA on Thursday.

“She did not say anything about that,” he said, when asked whether Ms Yingluck had showed any sign of worry. Norawich said in a phone interview yesterday that he expected the former premier to be given fair treatment and justice.

Ms Yingluck did not attend yesterday’s meeting of her legal team, which had recently provided more documents to the ex-PM to assist her in defending herself, according to the lawyer.

The team had gone through all the arguments presented by both the accuser and the accused since the case started, and had tried to provide her with complete information, he said.

Gen Prayut said he believed NLA members would base their decision on the evidence and the facts.

He also reiterated that the matter should not be linked to the efforts for national reconciliation.

When asked if he personally had any pity for Ms Yingluck, the prime minister said: “Do you sympathize with someone who commits wrongdoing? Even if you pity a wrongdoer, you can’t do anything when the law is involved. The point is you should not violate the law.”

The PM added that he was not referring to any case in particular in making these remarks.

Meanwhile, a number of NLA members said yesterday they had made their minds up on whether to vote for or against Ms Yingluck on Friday, with some of them stressing that they did not need to listen to the closing statements by the NACC and the ex-PM.

Some NLA members also said they would not take into account explanations in defence of the rice scheme provided by four ministers in the previous government led by Ms Yingluck. They made the explanations via YouTube, the video-sharing website.

Ms Yingluck was absent from last week’s inquiry session by the NLA as part of the impeachment process, during which both the anti-graft body’s “accuser” and the former PM – the “accused” – were asked questions by NLA members.

Upset that the ex-PM had failed to turn up, the NLA voted not to allow Yingluck’s representatives to answer the questions on her behalf.

NLA member Nipon Narapitakkul said he believed that most NLA members had already made their decision on how to vote.

Predicting the outcome of Friday’s vote in the impeachment case, he said he expected NLA members would vote in the same way as they did when not allowing her representatives to answer the NLA’s questions on her behalf.

Last week, NLA members voted 153 to one, with 21 abstentions, to require that only Ms Yingluck would be allowed to answer the questions directed at her.