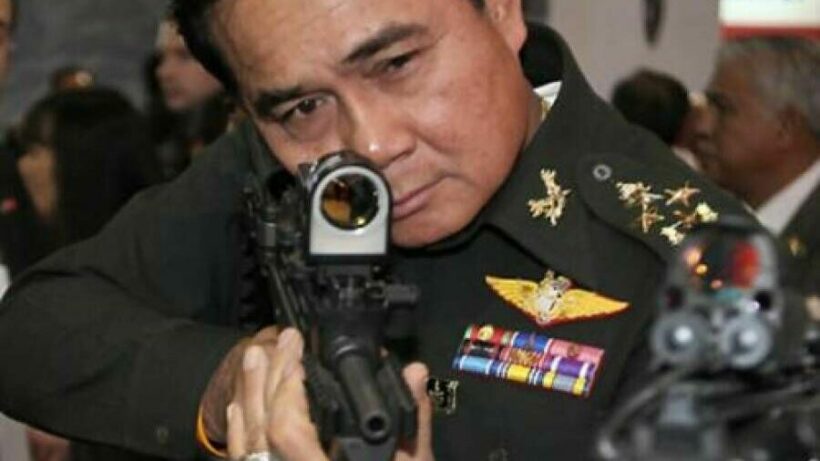 Thailand’s Prime Minister, Prayut Chan-o-cha, says he will not answer the reoccurring call for him to resign, neither will he dissolve the House as Thailand’s Covid situation continues to worsen.

The PM also cautioned politicians against exploiting the crisis, and/or inciting hatred which he says will only make the situation worse. The recondite hatred statement mirrors a statement from government spokesperson Anucha Burapachaisri, who recently warned people to not spread false, confusing, or distorted information because it could lead to “hatred”.

Prayut’s comments come from a video clip that was posted online that followed his order to ban the dissemination of “fake news”. The video shows the 36 minute interview between the PM and Nathreeya Thaweewong, who has the mouthful title of: the director of the Office of the Government Spokesperson.

The majority of the interview pertained to Covid: vaccines, lockdowns, and relief packages.

However, when it came to the question of whether Prayut has “lost heart” and might consider resigning and/or dissolving the House, the PM said “It is not the time. I am working hard every day…I try to do my best by listening to the people and getting updates from doctors and public health officials”. The PM did not say if there will come a time when he should resign.

He then begged “you politicians” to not cause any further trouble. He says they represent the people and are supposed to show good judgment and politics should not be used to create hatred as the country is now in trouble.

Then, when asked if had anything he wanted the public to hear, Prayut he “felt sorry” for people who have lost loved ones, and to offer his moral support for all involved in combatting the pandemic.

HolyCowCm
You better be nice to me or else! He doesn't care because he is surrounded and only really sees his boot lickers of the same feather, and in parliament is sitting high on his golden pedestal while controlling everyone. Even lives on a…

Golden-Triangle
There will riots on the streets soon, is he prepared for that ? Does the fool not realise that him and his pet monkey Anutin could soon be swinging from lampposts, the man is delusionary.
Aussieroaming
The other politicians are the voice of the people. The people want Prayut to resign because Prayut doesn't listen or sympathise with the people.

Poolie
Well what are you doing about it, apart from making a noise on here?

Lowseasonlover
1 hour ago, HolyCowCm said:  Even lives on a military base where he feels warm and protected. Wonder how many servants he has at that house. More than enough and he did say that was the safest place for him…