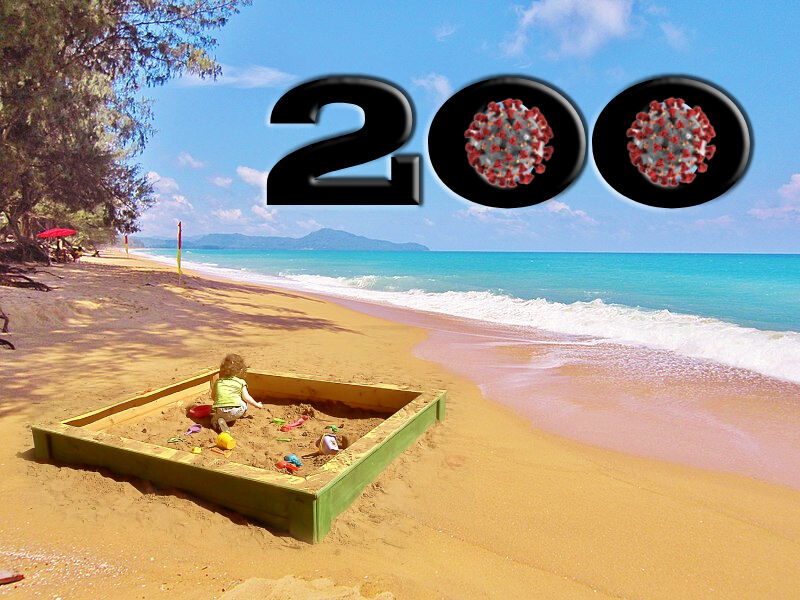 35 new Covid-19 infections pushed rolling 7-day total in Phuket to 209, more than doubling the feared 90 per week that would trigger Sandbox reconsideration according to the original official plans. When the total first passed the 90 infection threshold and surpassed 100, the Department of Disease Control declared that the overall situation was still far from critical and the Sandbox could continue.

None of the 35 infections were from international travellers in the Phuket Sandbox program; they were all locally transmitted. This trend of domestic infections prompted a near-complete shutdown of domestic entry to Phuket, creating a strange circumstance that the only way to get into Phuket is from abroad.

The Phuket Provincial Public Health Office announced the 35 new infections that bring the total official number of Covid-19 infections since the third wave of the pandemic hit Thailand in April to 1,108. Official numbers for some reason exclude several demographics including 30 international Sandbox infections, 18 people in the “Bring Phuket people home” campaign to bring infected natives for treatment, and those infected elsewhere and returning to Phuket, 8 from other provinces and 4 from abroad.

Today’s 35 infections do signify a drop from yesterday’s shocking 50 infections, more than double Thursdays 24 infections. Wednesday saw 38 infections up from 23 and 28 infections on Tuesday and Monday respectively. The week began lower with only 11 Covid-19 infections in Phuket last Sunday.

Deaths had held at 9 for a long time in Phuket but 3 more fatalities occurred over the last week for 12 total, no new loss of life this weekend so far. 307 Covid-19 infected people are either hospitalised or under medical supervision currently with 832 people already discharged from healthcare facilities.

On the 30th day of the Phuket Sandbox reopening, statistics are relatively positive with 13,281 people total arriving. over 10,000 have been there a week and received their second test and about 6500 had their 3rd test after 2 weeks. Only 30 tested positive for Covid-19 total, 7 after their second test and 3 after their third implying they likely contracted it on the island.

JackIsAGoodBoy
Just start giving people Ivermectin. India cut down skyrocketing daily cases from 400 000 in May to 40 000 currently! The climate and other factors are the same pretty much in most parts as in Thailand. The only difference is…

MrStretch
10 minutes ago, JackIsAGoodBoy said: Just start giving people Ivermectin. India cut down skyrocketing daily cases from 400 000 in May to 40 000 currently! The climate and other factors are the same pretty much in most parts as in…
JackIsAGoodBoy
36 minutes ago, MrStretch said: "India experienced a decrease in the number of COVID-19 cases in May 2021. However, no data is available to support the claim that this is causally associated with the recommendation to use ivermectin. https://healthfeedback.org/claimreview/no-data-available-to-suggest-a-link-between-indias-reduction-of-covid-19-cases-and-the-use-of-ivermectin-jim-hoft-gateway-pundit/ That…

Smithydog
Hi All, We just seem to be heading off topic which is about the Sandbox. Discussions about the effectiveness or otherwise of Ivermectin are best applied to topics in the Covid-19 section of the forum. Thanks Moderator
vvdb.fr
16 hours ago, JackIsAGoodBoy said: Just start giving people Ivermectin. India cut down skyrocketing daily cases from 400 000 in May to 40 000 currently! The climate and other factors are the same pretty much in most parts as in…