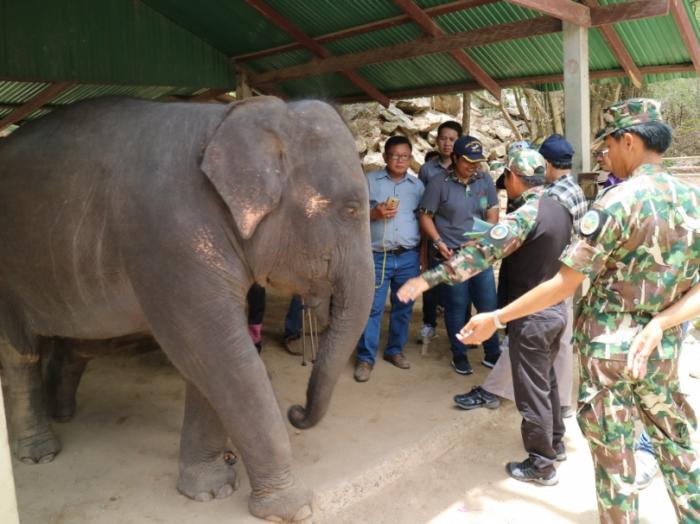 HUA HIN: A police raid at Hua Hin Zoo in Prachuap Khiri Khan province yesterday led to the confiscation of more than 100 animals, The Nation reports.

The raid was launched as part of a crackdown on illicit animal trades, after investigations into the Tiger Temple lead to the discovery of animal parts and corpses (story here).

The Department of National Parks, Wildlife and Plant Conservation (DNP) inspection team, led by Phraya Suea Taskforce commander Chaiwat Limlikitaksorn, confiscated the animals after it was allegedly found that many of their documents had been forged.

Mr Chaiwat said the raid revealed that all the protected animals in the zoo had been acquired illegally.

“We inspected the zoo on May 28 and found a couple of suspicious mistakes on two of the elephants’ licenses,” he said. “We looked further into it and found that all the licenses for protected animals were fake.”

“According to the licenses issued in 2003, all the animals should be over the age of 13, but it turned out that all the animals in question were below the age of 10. This is proof that the zoo forged the official documents and obtained the wild animals unlawfully,” Mr Chaiwat said.

Mr Chaiwat said the DNP will press charges against the zoo owner.

The animals seized from the zoo yesterday include two elephants, two tigers, five Asian black bears, two Malayan sun bears, two deer, one fishing cat and one crocodile. The animals will be sent to wildlife breeding centers across the country, DNP officials confirmed.

Mr Chaiwat said the staff at the Hua Hin Zoo had been arrested twice previously for acquiring protected animals – first in 2014, then again last month.

The raid comes on the heels of an investigation into the theft of endangered tortoises from Bang Phra Waterbird Breeding Center in Chon Buri. The center’s new chief, Padet Laithong, said police had found traces of the missing tortoises, but refuse to reveal details for fear it could jeopardize investigations.

“Police suspect staff in the breeding center to have facilitated the tortoises’ theft,” Mr Padet said. “Either that or the thief may have acted as a tourist and stolen the tortoises when staff were not looking.”

Mr Padet added that the animals were stolen during the Songkran holiday, when there were too few staff to guard the animals. Despite the low security, the center was open to visitors.

“Security will be stepped up at the center and CCTV will be installed to prevent future thefts,” he added.

DNP investigations into wildlife trafficking at Wat Pa Luangta Maha Bua Yannasam-panno, more widely known as the Tiger Temple, have resulted in charges being filed against five suspects. DNP officers said the five suspects were allegedly involved in the illegal possession of the protected wild animals, and that three are out on bail after surrendering, while another two are on the run.

Deputy National Police chief Chalermkiat Srivorakan has not confirmed whether Tiger Temple abbot Phra Vissuthisaradhera (Luang Ta Chan) will be charged. Gen Chalermkiat said the case was still being investigated and it was too early to speculate.

It is also suspected that a businessman, known to authorities as ‘Kwuang’, was behind the Tiger Temple operation. Mr Chalermkiat said Kwuang was still in Thailand and police would summon him for interrogation soon.