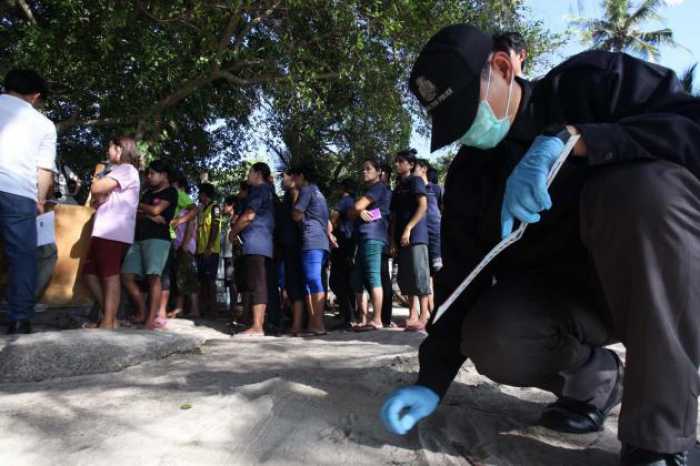 PHUKET: Police are looking for the son of a former Koh Tao village headman in their pursuit of the killers of two British backpackers on the night of September 14, after learning that the man left the island the following morning.

A police source said the man they want to find landed on the Surat Thani coast and disappeared. Police say they want to interrogate him first.

The police last night released two men, who own Intouch Bar and AC Pub on the resort island, after interrogating them for three hours and finding no evidence linking them to the crime.

One of the two men released last night, who reporters did not identify, said he was unable to contact his son and did not know if he had a hand in the killings.

Another man, the younger brother of the former village headman, who is believed to be the man seen on a security camera near the crime scene, is still in custody.

Pol Lt-General Panya Mamen, who is overseeing the investigation, said yesterday that the headman’s son is believed to be hiding in Bangkok. Panya refused to reveal the suspects’ names, saying police were questioning one man and expected to arrest another in Bangkok today.

Today marks the 10th day since David Miller and Hannah Witheridge were brutally murdered on the island. Both suffered serious head wounds, while police said Witheridge was also sexually assaulted.

“We expect results within 48 hours as DNA samples have been sent out for testing, and we are confident in this latest turn in the investigation,” he said.

All sides should have confidence in the police investigation and believe that no scapegoats will be arrested so that the case can be closed, he said.

“The world has been watching the case and police have been doing what they can to ensure that the evidence obtained is strong and tight enough to arrest the killers,” he said.

Panya also promised that the investigation would not be influenced by reports that some influential persons on the island might try to obstruct police work.

The chief investigator was speaking after police had summoned the owner of the Intouch Bar for questioning after investigators discovered that both victims had visited the bar and had had an altercation before they were found dead. Another person summoned was the owner of AC Pub, who local residents say is an influential person and the older brother of the man who owns Intouch Bar. Panya led the interrogation of both individuals.

Local people and tourism operators on the island yesterday attended an annual religious rite to make merit for their deceased loved ones. They also made merit for the slain Britons and prayed that the police would be able to arrest the killers.

Meanwhile, a police source said it was not possible that people on the island did not have any knowledge of what might have happened on the night of the murder. The source said maybe they don’t want to talk to police, as they do not want to have problems with an influential group.

Udom Tantiprasonchai, an executive with Orient Thai Airways, said he will add Bt500,000 to the bounty placed for arrest of the killers, Senee Puwasettathaworn, president of Koh Samui Tourism Association, said.

Though the murders took place more than a week ago, and police have yet to charge anyone, tourism has not been affected too badly as it is still the low season. Local tourism operators, meanwhile, said they would not put any pressure on police, leaving them to focus on the job at hand.