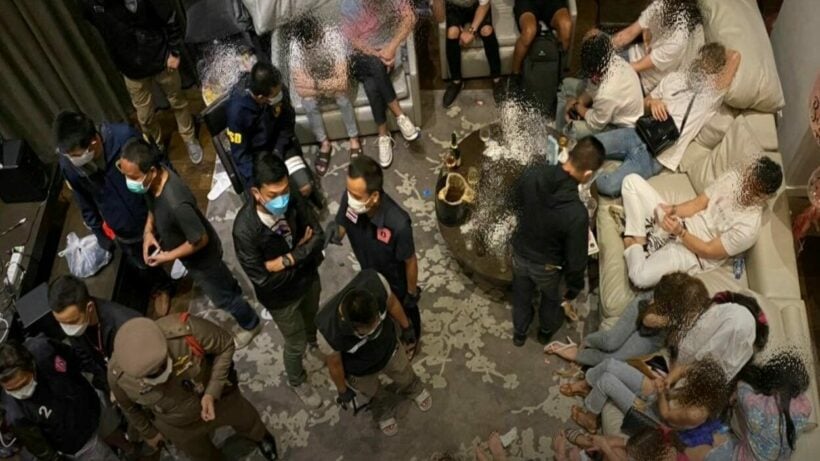 Thong Lor has again made the news for people partying. Recently, police raided a hotel room in Thong Lor, Bangkok. They arrested 21 suspects for allegedly taking drugs and breaking the emergency decree that forbids groups from gathering.

The police say they found methamphetamines and 4 bags of the anaesthetic ketamine, which is used recreationally for its relaxing properties. The police also say there was a birthday cake found at the scene. Mr Patima was charged with drug use.

The police brought the suspects to the Thong Lor police station for further legal proceedings, including testing their urine for drugs.

It was not stated whose birthday it was or if the cake was just for fun.

Back in April, 2 nightclubs in Thong Lor infamously led to a spate of Covid outbreaks. Then, last month, more partyers tried their luck at partying in Thong Lor and were also arrested.

Bob
21 hours ago, gummy said: Never mind about the other charges by the state of that floor they should be charged with littering.  I wonder which ones were the kids of government ministers ? Should of gone to spec savers.…
Bob
18 hours ago, Stonker said: Agreed - my first thought when I saw the photo. Beyond gungy. I think the idea that these are all "hi-so" is a bit imaginative, as were the previous reports. Cargo pants, copy trainers, cheap…
Stonker
5 hours ago, Bob said: Maybe you need new glasses like bob. It’s a pattern on a rug not litter  "... new glasses like bob."   Posted by "bob".    Bit of a giveaway there, "bob". ?   The place is…
DiJoDavO
The police also say there was a birthday cake found at the scene. It was not stated whose birthday it was or if the cake was just for fun. Well, do we have a mystery here... ? They also…
MikeTexas
Damn those are some filthy people.