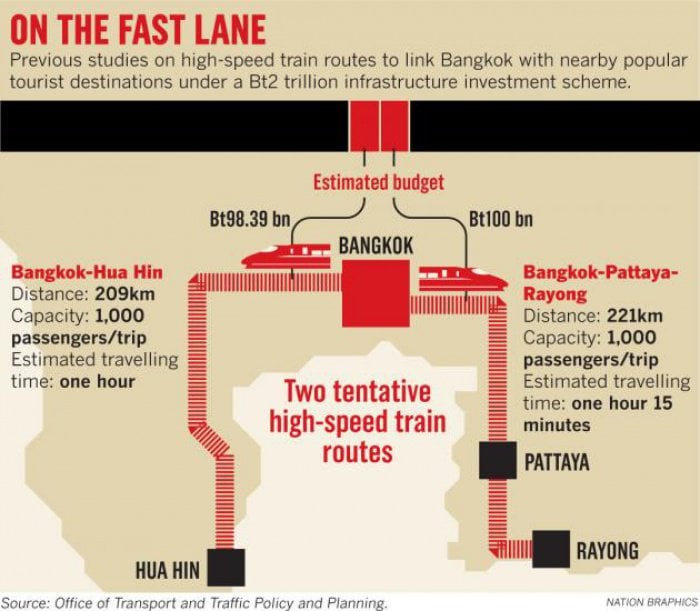 The government will provide support in terms of acquiring land for construction along with tax and non-tax incentives, similar to the Japanese public and private partnership model. Germany is believed to have shown an interest in investing, he said.

The possible rail routes being considered for this high-speed train project are Bangkok-Pattaya and Bangkok-Hua Hin.

The cost, the conditions, funding and construction plans, along with possible incentives could be proposed by the private sector and the government would be willing to talk to anyone about the matter, he said.

“The Board of Investment [BoI] has discussed today about possible investment in high-speed trains to support the tourism industry,” PM Prayut said.

The investment will be in the nature of a public and private partnership as there are many well-funded companies that can afford such an investment and the government can provide land for this venture,” the prime minister said, after presiding over the BoI’s first meeting of the year. “A similar project in Japan for a 700-kilometre high-speed railway costs around Bt400 billion,” he said.

He said the government would provide land already owned by the State Railway of Thailand for such an investment. However, the construction of a high-speed line, which would require a relatively straight route, might require the government to expropriate land and provide compensation to people who might be affected in the process.

‘Not part of seven-year plan’

Industry Minister Chakramon Phasukavanich clarified that the new idea for a high-speed railway is not part of the government’s seven-year plan to build infrastructure worth 3 trillion baht. He said “the government would find it hard to try and fund it on its own”, explaining that as the reason why the idea was being floated, to see if it draws a response from the private sector.

“The speed for this new high-speed train idea would be similar to the speed of the [Japanese] Shinkansen, which requires a straight railway line to operate on. This would mean that the construction might require expropriation of land and the estimated cost of 400 billion baht is not expensive.

“But the amount the government is expected to spend on investment in railways such as double tracks and standard gauges is already high, so this project is open for private sector participation,” he said.

He added that Germany’s ambassador to Thailand had revealed to him this week that Siemens AG had expressed an interest in the project, as they have extensive expertise in building high-speed railways. The most likely route that was being discussed was Bangkok to Hua Hin via Phetchaburi province.

He believes the Bangkok-Pattaya route would be more feasible, as it would pass through Sri Racha district and Laem Chabang Port before Pattaya and could be extended to Map Ta Phut Industrial Estate in the future.