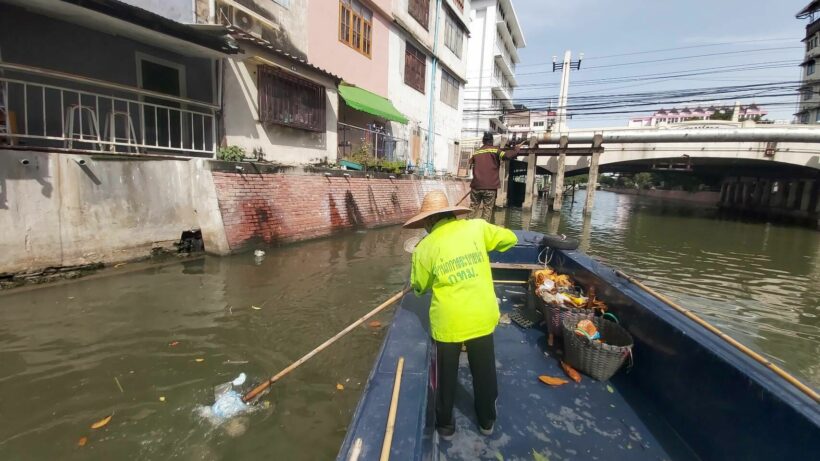 It’s no secret that Bangkok stinks. When you take a breath of “fresh air” on the street, it’s not rare for a concoction of barbecued chicken, pollution and sewage to enter your nose. Even after living in Bangkok for a number of years, the smell never gets any less pungent, especially in the summer months. The issue is untreated wastewater running through Bangkok’s subterranean tunnels, wafting upwards through the open sewage grates. It’s no wonder that Thailand’s Prime Minister Prayut Chan-o-cha wants to make Bangkok’s waterways smell better.

The Ong Ang canal, home to the Ong Ang walking street, used to be known as Bangkok’s stinkiest canal. However, the situation improved a lot after a five year beautification process. Despite the efforts, problems are returning. PM Prayut visited the area yesterday to listen to local people’s plights relating to the canal and connecting waterways. The government has agreed to take action on two problems: sewage and flooding.

The Department of Drainage and Sewerage is going to open up the Ong Ang canal’s drainage system to increase water circulation into the Bang Lamphu canal. Hopefully, increased circulation will quell the putrid smell of sewage in the area. Stagnant water creates breeding grounds for those nasty black and white mosquitoes that spread Dengue fever, so increasing the water flow should also reduce mosquito propagation, which will be appreciated by locals and tourists alike.

Yaowarat Soi 35 in Chinatown has faced problems with flooding due to clogged drains. An investigation revealed that build ups of grease are the problem. The department has unblocked the drains and has asked street vendors and restaurants to not throw food waste into the sewers to prevent the issue from recurring. Grease traps have also been installed in affected areas.

Cathat
So bangkok will be the venice of the east once again,yeah right!

Augratin
16 hours ago, Thaiger said: PM Prayut wants to fix Bangkok’s smelly canals You're hired. Now to find a replacement PM...
Lawyers_Guns_and_Money
16 hours ago, Thaiger said: It’s no secret that Bangkok stinks. When you take a breath of “fresh air” on the street, it’s not rare for a concoction of barbecued chicken, pollution and sewage to enter your nose. Even after…
Prosaap
The problem are the selfish thai people who just drop garbage where the walk even a garbage bin is in reach the still trow it on the street they like to live in a garbage dumb they will need to…
ibgort
Only need to look at the wall along the klong to see the sewer outflow coming out.